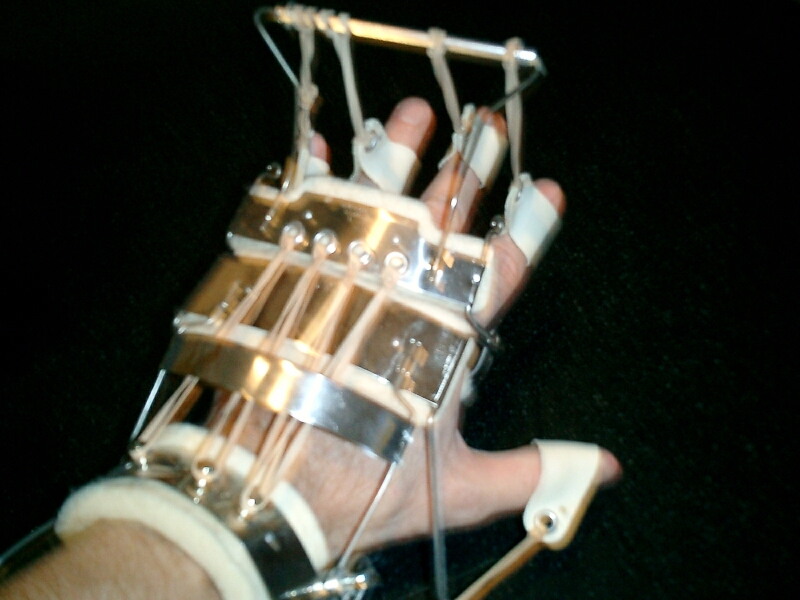 MEGADETH's DAVE MUSTAINE: How I Injured My Arm

MEGADETH mainman Dave Mustaine has posted a message on the group's web site explaining the debilitating injury in 2002 that caused severe nerve damage to his left arm and hand, and rendered him unable to play the guitar. Mustaine's message reads as follows:

"In December of 2001, a few days after Christmas, I went out to La Hacienda Treatment Center in Hunt, Texas. I had relapsed and you will find out with the other questions what led up to that, and now it was time to go to get detoxed again.

"On January 7th, 2002, while at the hospital, I sat on a chair which I hung my arm over the back of. The hard edge along the top of the seat back cut off the circulation to my radial ulnar nerve. After approximately two hours I woke up and my left hand was numb. I went to the nurse's station and they said it was the hair-tie I had on my wrist. I wish. I had to go into town to see a specialist and he said that I would be lucky if I ever gained even 80% of the use of my arm again. This was unacceptable for me, so I left the rehab, against medical advice and when home to Scottsdale, Az. to get my arm checked out by a city doctor. My Dr. Rahj Singh, a expert in nerve damage, spinal damage, etc. said that I may get 100% use of my arm, but that I would never play the same. He then prescribed the braces you see [here]: Photo#1, Photo#2, Photo#3. I then proceeded to Nathan Koch for physical therapy for 4 months of sessions, three times a week, 1-1.5 hours a day. After I finally got my feeling back in my hand, I realized that I could not even hold a feather in that hand and started a grueling 1-year weight-training program. 13 months after I hurt myself, a personal assistant that had worked for me died in hospice of drug damage, and I was asked to play. It was the first time I had held a guitar since November 17, 2001. Since then, I have completely healed and started taking lessons intermittently to re-learn my trade. After an additional 5 months I decided that I was going to play again, but that is another story.

"I know that there are going to be people who are relieved to finally hear the truth, and I apologize for taking so long to tell you, I just wanted to make sure it was finished healing."