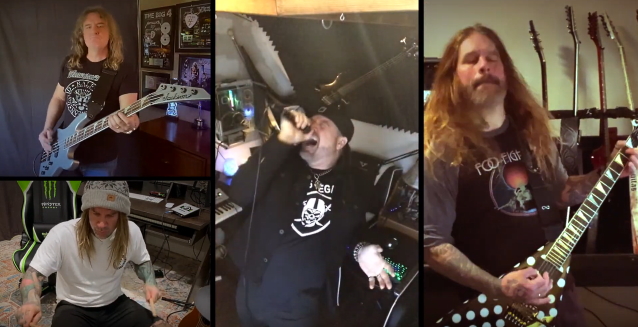 Phil uploaded the video to his YouTube channel, writing in an accompanying message: "Me and Stix has been wanting to jam on something for awhile and finally had the opportunity on one of my favorite tunes from this era.

"STEEL PANTHER took over the [MACHINE HEAD] practice gear in Germany after our sets at the Rock Am Park Festival in 2012 and were slaying a bunch of DOKKEN covers. This had to be one we did.

"I had realized that Dave hadn't guested on a ['Collab-A-Jam'] yet so he was a no-brainer. Dave and I have the same mind-set as things go and he's one of my favorites in the business. Always quick with the tracks and loves to get things done.

"Russell was the final piece and came through big. Such a huge talent and gave the song all the sprinkles.

"Paul Fig has been such a rad connection through all of this and beefed up our mix while Wayne Marsala is always on point with the vid edits.

"Thanks to George, Don, Mick and Jeff for creating such a ROKKEN tune and to all who had a part in bringing this cover to life."