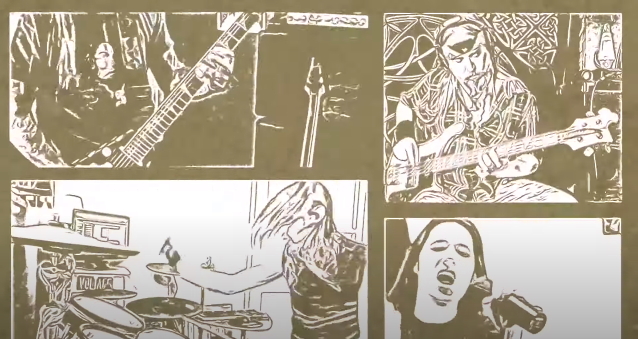 MEGADETH, TESTAMENT, Ex-MACHINE HEAD Members Team Up For Cover Of BLACK SABBATH's Falling Off The Edge Of The World' (Video)

Phil uploaded the video to his YouTube channel, writing in an accompanying message: "As the anniversary of Ronnie's passing was getting close, I reached out to Dino Jelusić to see if he'd be into singing on this tune. I saw him sing with TSO a few years back and thought he was awesome, but watching a vid of him cover the BADLANDS song 'The Last Time' blew me the fuck away. A SABBATH/Dio cover needs to [be] nailed. It had to be him. I next hit up my Bay-Area Brother, Steve Di Giorgio to do the Geezer [Butler] parts. We'd known each for about 35 years but never jammed together. I thought he'd be perfect.

"The intro is pretty layered. Steve had suggested we get real strings and brought in Julie Belanger Roy, she then layed down both a viola and violin track. My wife Marta found a keyboard patch that sounds sooooo close to the original and they NAIL it, all the way to the descending slide. I asked Steve about drummers and he mentioned he knew Dirk Verbeuren of SOILWORK/MEGADETH and could reach out. I had just watched Dirk play with Devin Townsend on the 70K Tons cruise and loved watching him play. A world-class drummer.

"Sounds like SDG put this line-up together? He pretty much did. Juan Urteaga got a slamming mix together and Scott Kirkeeng played around with the RotoScope effect you see on the vid.

"So much appreciation and thanks to all the above for the effort. This is done for fun and for the love of music, and this song was done in tribute of a man we ALL admire and carry the torch for. RJD RIP"