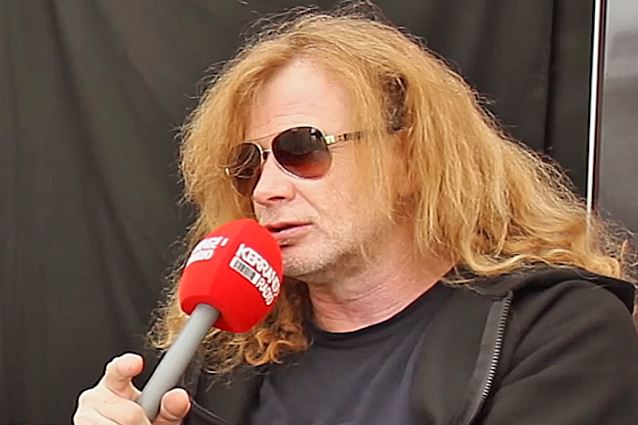 MEGADETH mainman Dave Mustaine was interviewed by Kerrang! Radio at this year's edition of the Download festival, which was held June 10-12 at Donington Park in Leicestershire, United Kingdom. You can now watch the chat below.

Asked how everything is going in the MEGADETH camp almost six months after the release of the band's latest album, "Dystopia", Mustaine said: "I think that things are going great right now for us. It's fun in the camp. People are getting along really well. We are enjoying ourselves travelling the world. The music's been well received. We are excited about the fact that as many people are receiving it the way that they are."

He continued: "When you play music, sometimes you hit the mark, sometimes you don't. This time we hit the mark. And I'm really grateful that the fans and the critics alike have received this the way that they have; it's really rewarding. So I'm looking forward to continuing to take this music to the world."

Mustaine also talked about MEGADETH's drummer situation after recently recruiting Dirk Verbeuren (SOILWORK) to play drums for the band while Chris Adler is busy touring with LAMB OF GOD.

"We'll see what happens for the future as we grow closer as a band," he said. "We're still trying to figure out what we're gonna do with our drum position. It's great having Dirk here. He's been really wonderful to play with also. So there's not a shortage of great players out there, and we're gonna make our decision real soon."

Adler played drums on "Dystopia" and has taken part in most of the band's live shows in support of the CD so far. On some of the shows where Adler was unable to play with MEGADETH, he was temporarily replaced by Tony Laureano (ex-DIMMU BORGIR, NILE, ANGELCORPSE),the veteran extreme-metal skinsman who has worked as MEGADETH's drum tech since 2011.