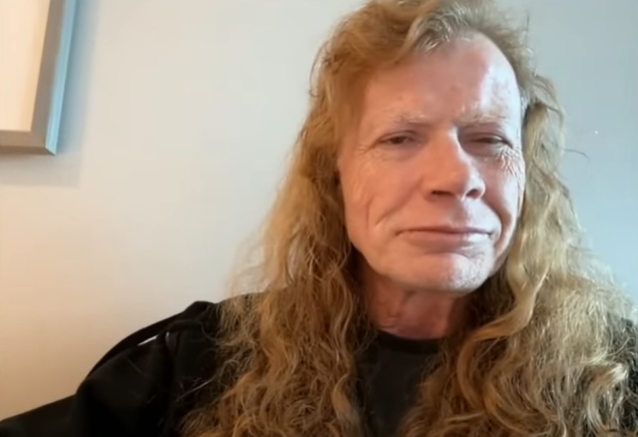 MEGADETH's DAVE MUSTAINE: 'I Was A Really Shrewd Business Person'

In a new interview with AXS TV's "At Home And Social", Dave Mustaine said that right now " has got to be one of the proudest moments" in his career, not only because of the release of METGADETH's 16th studio album, "The Sick, The Dying… And The Dead!", but because the band has "successfully completed" all of its contracts. "We turned in our last record to Universal, so we honored that contract and did everything that was part of it," he explained. "Same thing with the publishing; we completed our contract with the publishers and honored it and turned in everything we were supposed to. Now, how many bands do you know at our stage, at our status do that? They don't. They usually get an extension or they will have had such a huge contract in the first place with so many options that they'll never be free. I was a really shrewd business person and made sure that we were going to have a future as soon as we possibly could."

Back in 2013, Mustaine told Ultimate Guitar that it has always been important for him to maintain a high standard of quality with each MEGADETH album.

"I remember this one guy and I won't say his name but there was a guy I really, really, really looked up to and he wanted to get out of his record contract so he made a record that was utter crap," Dave recalled. "He knew it, I knew it and he duped his fans with it. I thought, 'This is not the way that I ever want to conduct myself as a businessman.'"

In the Ultimate Guitar interview, Mustaine also addressed the fact that MEGADETH had gone through a number of record labels over the years, saying: "When we initially left Capitol we were unhappy there because of all the administration changes. We loved the label but the direction kept changing and every time a new president would come in, as an older band you kind of got kicked to the curb. Because they had somebody they needed to prove. [After that] we went to Sanctuary and we were really excited, and man, was that a disappointment. That was so deflating. I just put my nose down to the ground and I went, 'You know what? I'm not coming back up until I'm satisfied.' Basically when we completed our contract with Roadrunner and did it with dignity and respect in an industry where bands take the money and run all the time, we finished our contract and kept our commitment and we honored them. Now we're on the other side of it and we're all better for it."

MEGADETH's 2013 album, "Super Collider", was the band's first to be released via Mustaine's label Tradecraft, distributed by Universal Music Enterprises (UMe). At the time, Mustaine told Artisan News about the band's split with Roadrunner: "We were obviously very unhappy [with Roadrunner]. But I just wanna make clear: there's a lot of great people that were there working [for Roadrunner] that we had great relationships [with]. Unfortunately, [there was a] lack of leadership [at the label]. You can have the greatest people in the world, but if you don't have anybody to quarterback the team, you're a loser. And we tried, we stuck it out, we honored the contract, we fulfilled all of our commitments, and when the time was up, it was time to move on."

Asked how the switch in record labels from Roadrunner to Universal Music Enterprises (UMe) affected MEGADETH's songwriting approach on "Super Collider", Mustaine told O2 Academy TV in a 2013 interview: "I think it affected the sound of the album, the style of music, the outlook of the band. I mean, no offense to Roadrunner — they did what they do — but we're a major-label band. And when we left Capitol to go to Sanctuary, it was for two reasons. One, I hated that record president that [Capitol] had at that time, and two, Sanctuary made a lot of big promises. And you know, when you think about [IRON MAIDEN's manager] Rod Smallwood, who had a big part to do with the label, that's IRON MAIDEN, and I love IRON MAIDEN, so I thought, 'For sure, this is gonna be great.' Well, it didn't end up being great, 'cause Rod wasn't involved in it as much as my brain would like to have thought. And we left Sanctuary and went to Roadrunner, and it just kept going like this [makes downward motion with his hand]. And I figured, I'm not gonna bail on the contract, I'm not gonna be a scumbag musician like so many musicians are where they stick people with contracts and break up and leave everybody holding the ball. I figured, 'I'm gonna honor the contract, I'm gonna finish it, and then when it's done, I'm gonna say goodbye like a gentleman.' And I did, and Universal came into the picture. I mean, think about this; this is so amazing. [Universal is] the biggest label; they own Capitol Records that has almost all of my catalog; they bought EMI Publishing that does own all my publishing. So you're a brand new record company… Not brand new, but for us… We've got a new label, a new record… Oh, by the way, I own all of your past life. I was, like, 'Who could possibly have arranged something that fantastic?'"