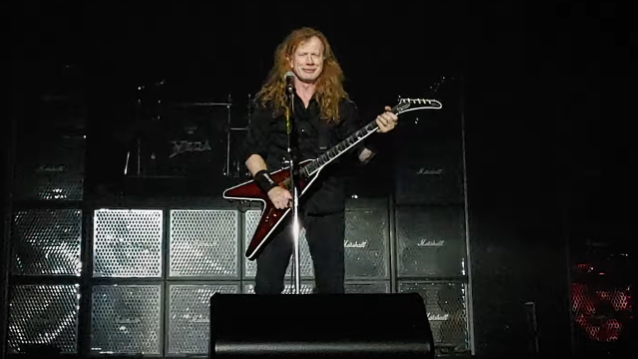 MEGADETH's DAVE MUSTAINE: 'If You Don't Like What I'm Saying, F**k You'

MEGADETH mainman Dave Mustaine has blasted people who object to his stage banter, saying they shouldn't be attending his band's concerts anyway.

The 60-year-old guitarist/vocalist, who has a history of making wacky political conjectures, made his comments during MEGADETH's performance last night (Tuesday, April 12) at Broadmoor World Arena in Colorado Springs, Colorado as part of the group's "The Metal Tour Of The Year" with LAMB OF GOD.

Mustaine said (as transcribed by BLABBERMOUTH.NET): "The last couple of nights I've been talking from the stage. It's been a long time, and we've all been waiting for live music again. And there's some people who have taken exception to some things that I've said from the stage the last couple of nights. And I thought to myself, 'Well, if you don't like what I'm saying, why are you at a MEGADETH concert?' If you don't like what I'm saying, fuck you. First Amendment, right? Freedom of speech. Fuck you. That's what I say. Don't take shit from anybody ever."

Just two days earlier, during MEGADETH's concert on Sunday (April 10) at the Tucson Arena in Tucson, Arizona, Mustaine claimed that he "peed on the floor" of the White House bathroom three decades ago. The musician, who went to the White House in 1992 with the "Rock The Vote" campaign for the Democratic National Convention coverage, told the audience that he was "proud" to represent the metal community, before adding: "When I went up to the White House, I was so proud to be able to go up there and say, 'Fuck you. You think we're stupid? We are not stupid, motherfuckers.' By the way, when I went into the White House, I went into the royal — whatever the fuck it's called — White House bathroom, and I peed on the floor. I had to. I had to."

James LoMenzo is playing bass for MEGADETH on the second U.S. leg of "The Metal Tour Of The Year". LoMenzo joined MEGADETH in 2006 and appeared on two of the group's studio albums, 2007's "United Abominations" and 2009's "Endgame". He was fired from the band in 2010 and replaced with returning original MEGADETH bassist David Ellefson.

MEGADETH's new album, "The Sick, The Dying, And The Dead", is tentatively due on July 8. The follow-up to 2016's "Dystopia" features a cover of DEAD KENNEDYS' "Police Truck" and Sammy Hagar's "This Planet's On Fire", the latter of which includes vocals from Hagar himself.

The bass tracks on "The Sick, The Dying, And The Dead" were laid down by Steve DiGiorgio, widely renowned as a pioneer on the fretless bass in heavy metal music, having played with TESTAMENT, DEATH and SADUS, among others. Within his genre, Steve is respected for his playing skills, versatility and incredible technique. He has more than 40 studio album recordings and over 20 years of touring the world.

There had been speculation about DiGiorgio's involvement in the new MEGADETH LP since last July, based on a Cameo video Mustaine recorded in which he offered the first glimpse of the bassist that re-recorded Ellefson's bass tracks on the much-anticipated MEGADETH effort.