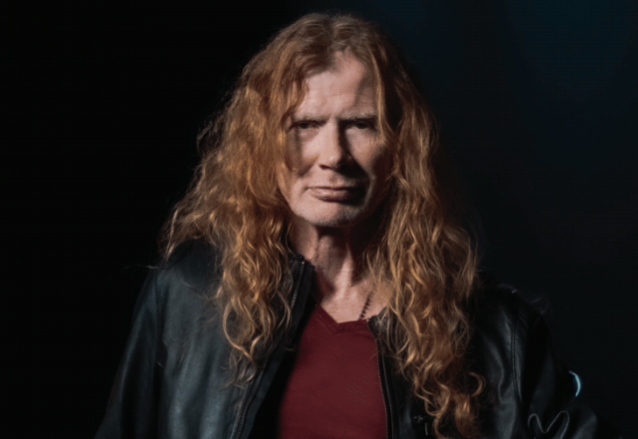 Thrash metal pioneers MEGADETH cap off 2022 with their 13th Grammy nomination for "Best Metal Performance" for the song "We'll Be Back" from their new, critically acclaimed album "The Sick, The Dying… And The Dead!" (UMe).

"I am so happy to be nominated again," says MEGADETH leader Dave Mustaine. "I am still on a high from our last win, and this is just surreal. After all the hard work put in by my team, this moment is for them to share in the celebration as well!"

MEGADETH won the 2017 Grammy Award for "Best Metal Performance" for the title track of the band's 2016 album "Dystopia". This marked the group's twelfth Grammy nomination in this category (including nominations in the discontinued "Best Hard Rock/Metal Performance" category).

As MEGADETH approached the stage to accept the award, the house band inexplicably played the song "Master Of Puppets" from Mustaine's former band METALLICA.

In his acceptance speech, Mustaine said: "Fantastic! Only took twelve tries to get this. Last time we were here, we were talking to Kenny G, and he asked me how many times we were here, and he goes, 'Well, eleven isn't that bad.' And I said, 'How many times did it take you?' And he said, Twenty-one.' And I was, like, 'Oh, my god. If it takes twenty-one times… I don't know if I'll live that long.'"

Mustaine continued: "I wanna thank Jesus Christ, I wanna thank my wife, my children, all the band's wives and kids, I wanna thank our management, our label, our agent, our attorney, our crew, all of you, especially the metal community. I think it's a little weird that we ended up being category 69, but somebody's got a sense of humor."

Five years ago, Mustaine famously told The Columbus Dispatch in an interview that he wouldn't be fully satisfied until he had a Grammy with his own name on it.

Back in March 2018, Mustaine was asked by Rolling Stone what it was like winning his first Grammy Award. He responded: "We've been nominated a lot of times, which is great — it's very flattering. But there's only so many times you can say, 'Oh, I'm really happy I was just nominated.' [Chuckles] Yeah, right! So I remember it when we actually did win, the way that they announced it, it was kind of backwards. Margaret Cho was the presenter, and she said, 'And the winner is 'Dystopia',' and it was supposed to have been the winner was MEGADETH, because it was about the band, not about the song. It took a second to sink in, and then we got up there. And then, on the way down there, the music is playing in the background, and I didn't even care. We got up there and we did our thing. And somebody goes, 'Did you hear the song they played when you got your award?' And I was, like, 'No.' Evidently, they played a METALLICA song. And I said, 'I don't feel bad for 'em, 'cause they did a really, really bad job of it.' Good thing is it didn't say 'METALLICA' on the freakin' Grammy!"

"The Sick, The Dying… And The Dead!" debuted at the top of the charts during its first week of sales, taking the No. 3 spot on the Billboard 200 as well as number ones on Top Album Sales, Top Current Albums Sales, Top Rock & Alternative Albums, Top Rock Albums and Top Hard Rock Albums. "The Sick, The Dying… And The Dead!" is the highest-charting MEGADETH album of all time around the world, notching No. 1 in Finland, No. 2 in Australia, Poland, Switzerland, and Scotland, No. 3 in the U.K., and more.

Mustaine was fired from METALLICA in 1983 — some three years before "Master Of Puppets" was released — over substance abuse and anger issues. Although he later conceded that he was "bitter" for a period of time after being dismissed, he insisted that any perceived feud with his former bandmates was an illusion.