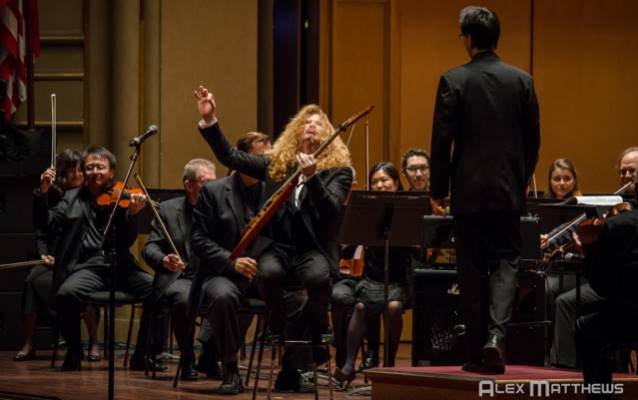 "Jeopardy!", hosted by Alex Trebek, began in 1984. This game show, which generally airs weekday evenings, features three contestants answering a series of questions (posed by Trebek in the form of an answer) on a variety of topics. Each question has a monetary value and contestants can get extra points if they hit a "Jeopardy!" "Daily Double." The final segment of each episode has them answering a "Final Jeopardy" question. Whoever has the most money accrued at the end of the show gets to return to compete on the next episode of "Jeopardy!"

In the classical music category during last night's episode, Trebek mentioned Mustaine's appearance with the Symphony with the answer: "In 2014, MEGADETH's Dave Mustaine sat in with the S.D. Symphony to play 'Winter' from 'The Four Seasons' by this man." The correct question, of course, is "Who is Antonio Vivaldi?"

Mustaine's concert with the San Diego Symphony, billed as "Symphony Interrupted", took place at the 2,200-capacity Copley Symphony Hall in San Diego, California. The event saw Mustaine perform Richard Wagner's "Ride Of The Valkyries" with the orchestra, as well as solos of Vivaldi's concertos from "The Four Seasons", plus Bach's classic "Air".

Check out what was on @Jeopardy last night! #whoisvivaldipic.twitter.com/CFZ6XCv1Kt