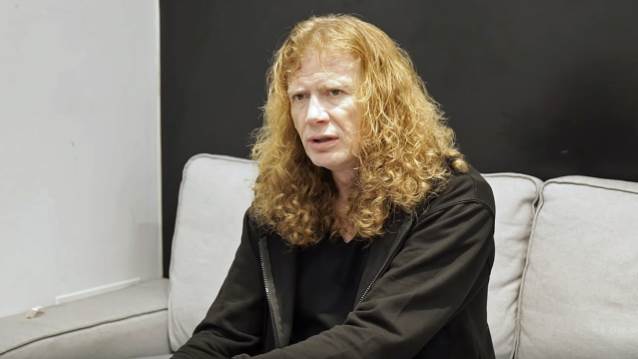 MEGADETH's DAVE MUSTAINE On Possibility Of More 'Big Four' Shows: 'There's One Person That's Holding It Up For Everybody'

Prior to MEGADETH's June 10 performance in Copenhagen, Denmark, vocalist/guitarist Dave Mustaine was interviewed by Heavymetal.dk. The full conversation can be seen below. A few excerpts follow (as transcribed by BLABBERMOUTH.NET).

On his early guitar inspirations:

Dave: "My inspirations were more along the guidelines of the New Wave Of British Heavy Metal and the British Invasion. There's a lot of great bands that are out right now [that] fans look to, a lot of young bands that are really great. For me, I always wanted to know, 'What were their influences?' Like with VAN HALEN — everybody thinks that David Lee Roth was such a great frontman, but what was his influence? It was Jim Dandy of BLACK OAK ARKANSAS. It's like David Lee Roth is a clone of him, except for his voice of course — the black leather pants, real low hip-huggers, big, giant belt buckle, no shirt, tan, muscles... the same thing. For me, when I look at my influences, I try and go back in time. Jimmy Page was a huge influence guitar-wise. Angus [Young] was a big guitar influence; so was his brother, Malcolm. Believe it or not, I was probably more influenced by Malcolm than I was by Angus. I liked Angus's solos a lot, but the rhythm of AC/DC was what did it for me, because there was a hook to it. A very simplistic hook. I think that's what's suffering with music nowadays — people are trying to be so fucking cerebral with their music, and a guy that played music with us at one point came up to me and goes, Hey, 'I've got a new riff,' and I was listening to it and it was awful. I said, 'What is it?' He said, 'Well, it's MEGADETH in Morse code. I was like, [puts head in hands]...

"How do I go back one more than Eddie Van Halen? What influenced Edward Van Halen? Classical. He was a classically trained guitar player growing up as a kid. I looked at some of the really great players — Vivaldi, Paganini, Chopin, Bach, Wagner, although not all of their movements or their pieces are stuff that I like. Vivaldi has 'The Four Seasons' — two of them, I like; the other two, they're a bit long for me, and while I can totally appreciate the songs, I've grown up in a kind of pop-radio mentality, so a four-minute song [is] paydirt. Where's the hook? When you have a song that's a little bit longer than four minutes for me, I tend to kind of lose the plot."

On MEGADETH's combination of groove and technical proficiency:

Dave: "I don't know that I would ever admit to wanting to be groovy, although that's a cool word. I think that a lot of people when they set out to be in a band, they're really flexible. For me, I only had one thing — I wanted revenge after changing bands. That's all I wanted. I just wanted everybody knew that all the lies that was being spread around that I couldn't play guitar... Just to think how absolutely bone-headed you have to be that I cannot play guitar. I definitely can play. Am I good? That's up to the listener. But just some of those things that people were saying is just crazy."

On the notion that the metal genre benefited from him leaving METALLICA and subsequently creating MEGADETH:

Dave: "It's about what was said. We're all friends now, so yeah, there's two great bands now. It was difficult, though, and it was totally unnecessary. But the beautiful thing about is, with the 'Big Four' as it is, it's no longer how it was, and the smoke is starting to clear and the dust is settling. SLAYER's going to retire; I don't know what's up with ANTHRAX; I don't know what's up with METALLICA; but I know we're ready to make another record, and we're still not going to take shit from anybody."

On whether he envisions MEGADETH lasting long enough to celebrate a 50th anniversary:

Dave: "I don't know. It's 35 for us right now, but to me, I think we'll know when the time is right. I don't think that if you put an age on a band... I think that's when you start to put unnecessary indicators on your career, like, 'Okay, what did he accomplish in 35 years?' Well, not as much as the fucking BEATLES did in six, okay, so let's stop with the comparisons. No one can keep up with those guys. Come on — 100 million-plus records in six years? That's just incomprehensible, and it makes you love THE BEATLES any more. That's part of why I say go back to your influences' influences. For me, loving THE BEATLES as much as I did, anybody who's been influenced by THE BEATLES, but one of my favorite 'easy-listening' bands is a band called CROWDED HOUSE. CROWDED HOUSE sounds so heavily influenced by THE BEATLES. I can only think if it was me and somebody was saying, 'You sound like you're influenced by one of the greatest pop bands in the world ever ever ever,' I would say, 'Thank you.' But we're not pop. When I picture myself growing up as a kid doing air guitar, I wasn't going [growls]. It's funny when you see people that play a musical style and somebody else doesn't understand it, how they try and make that style seem worse and their particular style seem better. I don't think there's any right or wrong way to make music."

On MEGADETH's global fan base, and the responsibilities of being a public figure:

Dave: "We went to China recently. MEGADETH has broken so many barriers for thrash metal bands, playing in China and Dubai and Israel and Turkey and Russia and Venezuela — all these places where you don't play. And we go there, and they love us, because we sing about what's in their heart. It's not necessarily what's on the minds of people, because minds can be infected. They can be changed, and you can very easily be dissuaded and believe some really bad shit in music. There's a lot of bands that sing and say stuff that I think is not cool as a parent, but for me as a parent too, I've got to remember that if you really love your kids, love them through the really difficult decisions too, not just the easy ones. I think that's why kids dig MEGADETH and me as much as they do, because I try to be a really good big brother, a really good uncle kind of thing. When anybody talks to me on our social feeds [or] my Gimme Radio station, I try and really be open about what it's like, what's my job like, what would I do as a parent. There's a lot of stuff that I would probably do that our fans' parents would do, but because it's their parents, they figure, 'Fuck you — you're my dad and my mom; I'm not going to listen to you.' But if I said, 'Hey, you know what — it's kind of a cool thing to open the door for older people when they walk in, that's kind of cool stuff,' or if you have somebody that you know could really benefit from saying, 'I forgive you'... there's an old Irish saying that if you carry a grudge, you have to dig two graves, because while you're planning somebody else's death, you're killing yourself. For me, I've kind of looked at it in a totally different way the last, maybe, 10 years. I've started to change my outlook on life, towards people. I'm a little bit more focused on the music and not so focused on what people are saying about me or about MEGADETH or anything like that. It's more about the music, and being there to help the fans and doing the right shit when the fans need stuff, not saying, 'Oh, hey, you know what — I'll be back later.' I've stood out in the snow with wet hair signing autographs, and I do that because it's the right thing to do."

On whether he foresees additional shows by the so-called "Big Four" of 1980s thrash metal — METALLICA, SLAYER, MEGADETH and ANTHRAX:

Dave: "I strongly doubt it. I would do it; I think the other two bands [apparently referring to SLAYER and ANTHRAX] would do it; but there's one person that's holding it up for everybody. So you've gotta ask the right person. I have nothing to fear; I have nothing to lose. We're all supposed to be friends now, so I think that if the fans are first and foremost, then you know what? Let's go. Let's go."

The band is tentatively scheduled to enter the studio before the end of the year to begin recording its new album for a 2019 release.

The 2018 deluxe reissue of MEGADETH's classic debut album, "Killing Is My Business... And Business Is Good!" was released on June 8 via Century Media and Legacy Recordings.