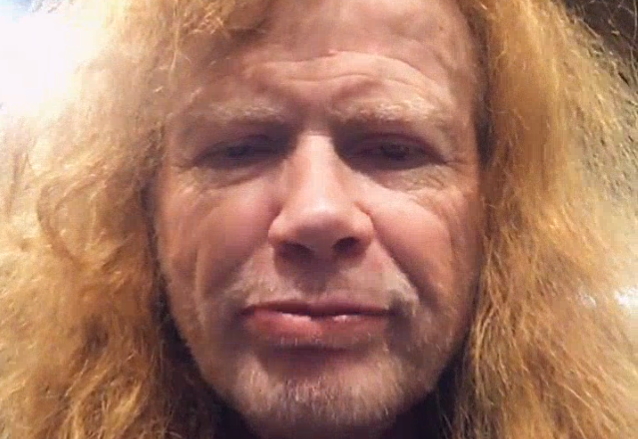 Dave Mustaine has recalled a "terrible trick" his wife pulled on him for his 30th birthday.

The MEGADETH leader, who turned 60 in September, recounted the episode while filming a new video message on Cameo, which lets users hire celebrities to record brief, personalized video messages about virtually any topic.

Addressing a fan named James who was celebrating his 30th birthday, Dave said (as transcribed by BLABBERMOUTH.NET): "I remember when I had my 30th birthday. My wife pulled this terrible trick on me and told me that one of my favorite dogs was in the backyard and had cut his leg on one of the sprinklers. So I come running into the backyard. I had just been in kickboxing class so I'm still in my uniform and everything. I run into the backyard and [I hear] 'Surprise.' There's a whole bunch of my friends [there]. Now, granted, I don't have a lot of friends, so there was just about every single one there. And I was so blown away. I was really mad at my wife for teasing me like that, but I got over it. And I had been given this killer jacket for my birthday from my sensei, Benny 'The Jet'. It was a Ukidokan kickboxing team jacket. So I took it and threw it into my bedroom. [My wife] Pam and I had white furniture at the time; we were newly married and didn't realize white furniture is lame. So we put her Doberman in the room too and it chewed my jacket up. Can you believe that? Oh, I was so mad."

Earlier this month, Mustaine revealed that MEGADETH's new album, "The Sick, The Dying And The Dead" has been mastered and is "super close" to being released. The follow-up to 2016's "Dystopia" is tentatively due in the spring of 2022.