Sam Pittis of Classic FM recently conducted an interview with MEGADETH mainman Dave Mustaine. During the chat, which can be streamed at this location, Dave explained his love of classical music ahead of his concert with the San Diego Symphony, where he'll be performing works by Vivaldi and Bach on his very own specially modified electric guitar.

Asked what the program will consist of for his performance with the San Diego Symphony, Mustaine said: "Basically, the songs that we've chosen… There are several rumors around what we're playing, and most of them are inaccurate. I can tell you right now accurately what it's gonna be. We're looking at a little bit of a rendition of the song 'Symphony Of Destruction' for me to enter to, so that we have a little bit of a MEGADETH connection. And then we'll probably segue from there into the piece 'Winter' [movement from Vivaldi's 'The Four Seasons']. And they'll go to an intermission probably with the song 'Air On The G String' by Bach. And I'll, of course, be playing the lead violin in both performances on an electric guitar. So you've heard the parts, but just imagine if it was done with a little bit of distortion and a little bit of a darker theme to it. It may be a little faster than what people are used to, it may be a little bit slower than what people are used to — 'Air' may be a little faster, 'Winter' may be a little slower… whatever. And then we're gonna have an intermission. We're gonna come back to… They're planning on playing Wagner's 'Ride Of The Valkyries', but I'm not sure that I'm gonna play on that one yet, 'cause I haven't really looked at that song yet. We're gonna close with 'Summer' [movement from Vivaldi's 'The Four Seasons'], and then that's it, and [we'll see] see how everybody likes it."

He added: "I think it's gonna be really neat, 'cause it's crossing two completely different societies — it's like a 'Romeo And Juliet' kind of a thing."

Regarding what the response has been like from MEGADETH fans to his decision to play with the San Diego Symphony, Mustaine said: "Well, the MEGADETH fans — the real, realMEGADETH fans will watch whatever we do.

"I think a lot of people are kind of wondering: 'What is he gonna do? MEGADETH songs? What's it gonna be like?' So, very simply stated, it's these classical tracks with me doing the lead sheet… whatever the notation is… how they call it. I'm self-taught, so half this stuff I'm learning on the fly."

Mustaine also spoke about the difficult technical challenges of performing classical music parts on an electric guitar, saying: "Some of the songs, it's natural — it's just in my soul to be playing some of these transitions — but some of the other things, it's pretty daunting, and it's made me a better player.

"When I was started, I used to surf when I was a kid and I listened to punk rock music a lot and jazz and classical, so that's why MEGADETH had such a peculiar starting, because it was a classically jazz, punk-rock-style metal band. Go figure."

Mustaine's concert with the San Diego Symphony, billed as "Symphony Interrupted", will take place at Copley Symphony Hall in San Diego, California on Saturday, April 12 at 8:00 p.m. Tickets are on sale now at SanDiegoSymphony.org.

Check out the official "Symphony Interrupted" poster below.

In an interview with Metal Sanaz conducted at this year's NAMM (National Association Of Music Merchants) show at the Anaheim Convention Center in Anaheim, California, Mustaine revealed that he will use a special instrument during the performance. "Dean Guitars has made a unique guitar for me that looks like a copy of a Stradivarius violin that had a baby flying V," he said. "And it's an amazing guitar."

Speaking to the Phoenix New Times last fall, Mustaine stated about the San Diego Symphony concert: "Yeah, that is pretty bizarre." He continued: "When we first started talking about that, it was kind of in passing. I was in England, actually, and someone said they would be interested in seeing my interpretation of the classics, because I'm very classically influenced. It's what I like to listen to, but it's not like I played it. It was tossed around and it went from me being someone who would do a narrative of classical stuff to someone actually playing it. I was pretty excited, but then they sent over their first two songs that they want me to play, which was some Vivaldi stuff, and as I listened to it I was, like, 'This is really difficult stuff.'

"When you're playing out of a guitar, it's a different mentality, and when you play it on a violin, the strings are tuned differently, so it's like going from playing tennis to handball. The same principle still, but a totally different finesse."

Mustaine also spoke about how his involvement with the San Diego Symphony might change perceptions about heavy metal musicians in general. "I think that it helps again, like in 1992, when I covered the Democratic National Convention, it really helps our genre," he said. "Because people don't really think very highly or widely, for another variable on that, when they think about heavy metal people. They think we're limited on the scope of how we are educated and what we're made up like. And I think doing this will be really great, because a lot of metal people are gonna see some really cool music, and a lot of stuffy old classical people will see some great guitar playing. I think it will be really weird seeing people in the audience with monacles and tuxedos and some guy will stand up and yell, 'Fuck yeah, Dave!' [laughs]" 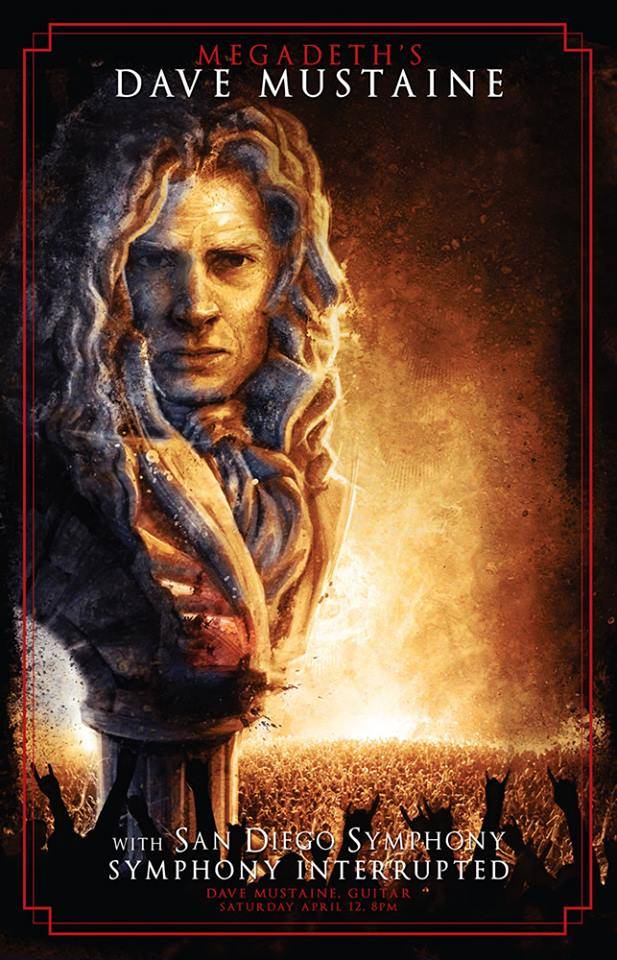