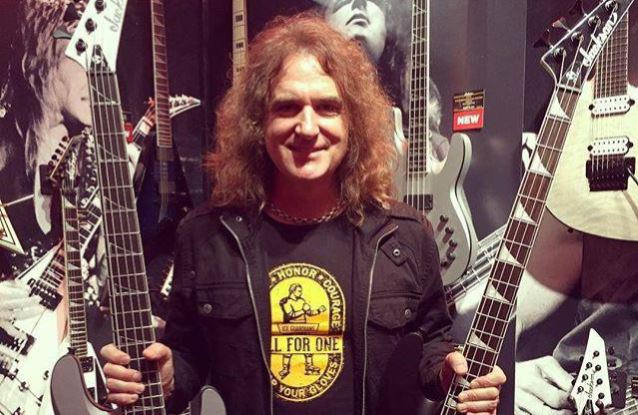 In a brand new interview with Bass Player magazine, MEGADETH bassist David Ellefson spoke about the lineup changes that occurred before the recording of the band's latest album, "Dystopia". He said: "The fans really embraced [previous MEGADETH members] Chris [Broderick, guitar] and Shawn [Drover, drums] and what they did in this band. It was a nice revisiting of the original 'Rust In Peace' lineup, which seemed to be a fan favorite as far as members go. But what occurred to me is life moves forward and music moves forward. It's important to us that the quality of our music is maintained at the highest level, and in 2015 we knew we had to continue on at any cost. Chris [Adler, current MEGADETH drummer] has always been a big fan of MEGADETH, so he brought a huge energy to this band and these sessions that only a seasoned drummer with a fan appreciation of a band could. And Kiko [Loureiro, current MEGADETH guitarist] is very aware of the history of MEGADETH and of our guitar players, and he's one of the most astute musicians I've ever worked with. I feel confident that with the group of players we have now, the music of MEGADETH is in as good of hands as it's ever been."

Ellefson also talked about the how the music on "Dystopia" is different from that on MEGADETH's previous album, '2013's "Super Collider". He said: "There was definitely a very focused mission on the music, where we tended to not focus on hit-single choruses or any of those things that we might have for 'Collider'. When we land on those things, they always happen very naturally. But this record was all about taking the throttle off of this thing and letting everybody go to the hills with their playing. And I think you can hear that. The guitars, bass, drums, vocals, solos, and arrangements are a huge step forward from the past couple of records."

MEGADETH's fifteenth studio album, "Dystopia", was released on January 22. The follow-up to 2013's "Super Collider" was recorded last year in Nashville, Tennessee and was mixed by Josh Wilbur, who has previously worked with LAMB OF GOD, ALL THAT REMAINS and GOJIRA.