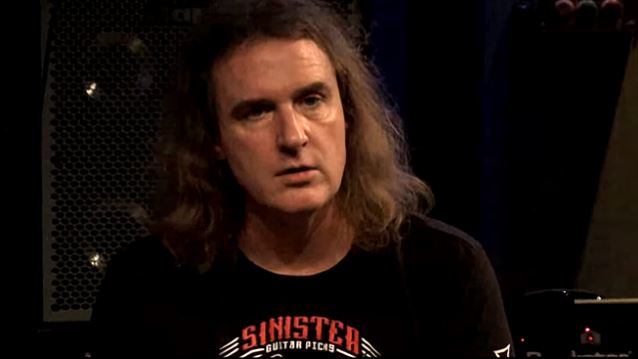 MEGADETH bassist David Ellefson says that the recent departure of drummer Shawn Drover and guitarist Chris Broderick "sent a lot of heads spinning, both internally and externally," but insists that he still considers the duo to be his "friends."

Asked how the feeling is in MEGADETH now that Drover and Broderick have left, Ellefson told The Rockpit: "Things are moving along. Obviously, it was a sudden departure and kind of sent a lot of heads spinning, both internally and externally. And at the same time, I have noticed over the years that people, when they reach a certain point, if they feel they need to move on, the best thing you can do as a friend to them is let them go, and I consider Chris and Shawn friends."

He continued: "When you live in the yellow submarine together for five years [laughs], you tend to get pretty close and sometimes you're closer with your band than with your own family, because they become your family. They are your extended family when you're on the road with them and in the studio for so many days and weeks and years at a time.

"Shawn is a great songwriter; he writes some really good material and [I'm] excited to see what he does next."

Ellefson added: "I always felt that a guy like Chris Broderick is similar to Marty Friedman and those guys in the way that a lot of them at some point get to a place where they can almost start making their own solo records and doing their own thing, like Jeff Loomis and various guys. It comes to that moment where certain guitar players can do that, and I think Chris is one of those guys, so I'm interested to see what he does next in his career.

"Chris is a great guy, he's a sweet spirit, he's a beast of a guitar player and he's got a really endearing personality, and, obviously, great music abilities."