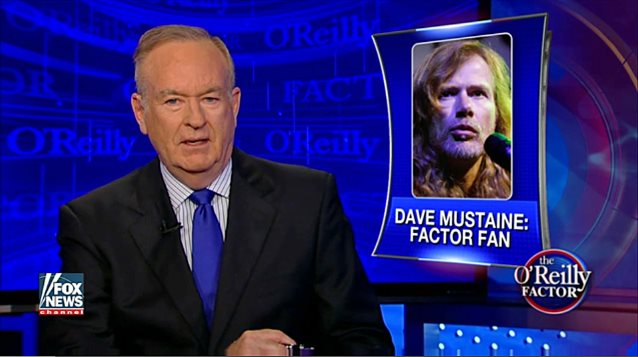 "A hard rock guy named Dave Mustaine who used to be in the group METALLICA and is now in the group MEGADETH is apparently a big 'Factor' fan," O'Reilly said (see video below). "Mr. Mustaine tweeted out pictures of all the 'Killing' books he has read, and that gets my attention. Very politely, Mr. Mustaine then asked me to listen to MEGADETH's new album, 'Dystopia'."

After playing a 30-second snippet of the "Dystopia" title track, O'Reilly joked: "Now, right before I go to sleep, I usually listen to MEGADETH. It relaxes me, it brings me down."

He then added: "I have to say I'm an R&B guy, not heavy metal or hard rock. However, I keep an open mind on these things, and some members of my staff are big MEGADETH fans. They've got piercings everywhere. So we wish Dave Mustaine much success with his new album and admire his promotional ability."

In terms of pure album sales, "Dystopia" opened with 48,000 copies, marking MEGADETH's highest-charting album since 1992's "Countdown To Extinction" debuted and peaked at No. 2 on the chart dated August 1 of that year. "Dystopia" also logs the group's best sales week since 2007, when "United Abominations" landed at No. 8 with first-week sales of 54,000.