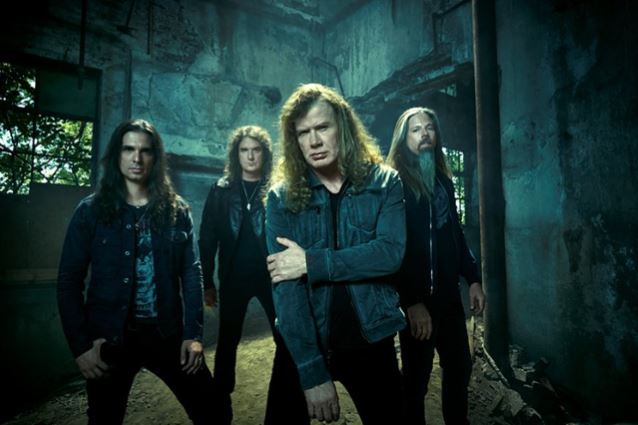 According to music industry web site Hits Daily Double, MEGADETH's new album, "Dystopia", is likely to sell between 43,000 and 48,000 copies in the United States in its first week of release. The SPS figure is expected to be between 44,000 and 49,000.

While SPS is at the moment only a practice seen with The Billboard 200 and a couple other international album charts, it is not currently used by the RIAA (Recording Industry Association of America) to determine how albums should be certified; the RIAA relies solely on pure album sales and shipments.

Featuring 11 brand new tracks, "Dystopia" was released on both CD and LP, as well as digitally through all online partners on January 22 on Universal Music Enterprises / Tradecraft / T-Boy Records.

With musical architect and band visionary Dave Mustaine at the helm, "Dystopia" was recorded in Nashville, Tennessee and mixed by Josh Wilbur (LAMB OF GOD, GOJIRA).

The rest of the MEGADETH lineup is comprised of new member Kiko Loureiro (of ANGRA),David Ellefson on bass, and drummer Chris Adler, who took time away from LAMB OF GOD to record "Dystopia".