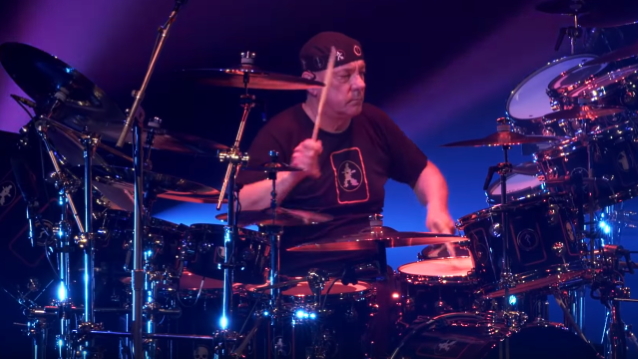 Members of BLACK SABBATH, KISS, MEGADETH and KING DIAMOND are among the rock musicians who reacted on social media to the passing of RUSH's Neil Peart. The iconic drummer passed away on Tuesday (January 7) in Santa Monica, California after having been diagnosed with brain cancer.

A statement posted on the band's official Twitter page said: "It is with broken hearts and the deepest sadness that we must share the terrible news that on Tuesday our friend, soul brother and bandmate of over 45 years, Neil, has lost his incredibly brave three and a half year battle with brain cancer..."

The statement went on to ask for privacy for Peart's family "from friends, fans, and media alike" and requested that mourners make a donation in Peart's name to a cancer research group or charity of their choice."

RUSH had been completely inactive since completing its "R40 Live" tour four years ago. Peart previously said that playing concerts at his age caused too much painful wear and tear on his body and he'd rather call it quits before the performances start declining in quality.

His survivors include his wife Carrie and daughter Olivia.

In 1997, Peart and his bandmates became the first rock musicians to be inducted into the Order of Canada.

Absolutely Horrible News. Neal Peart has died after fighting brain cancer for years. His later life was filled with so much family tragedy. So, so sad. I’m just shocked. pic.twitter.com/EM4Ea1quaY

Really sorry to hear about Neil Peart’s passing. He was an amazing drummer and made a huge ccontribution to Rock music. All my best to Alex and Geddy.

My hero just died.
Neil Peart is no longer with us. He´s always been there, I quote him daily, I listen to him all the time and I think "What would Neil write" often. A true inspiration and someone I´ve looked up to like no other. Farewell my king.#rush#neilpeart

My prayers and condolences to the Peart Family, Fans and Friends. Neil was a kind soul. R.I.P....... Rush Drummer Neil Peart Dead at 67 - Rolling Stone https://t.co/icYz6fnXfE

So sad to hear about Neil Peart passing. My deepest condolences to his family, friends and fans. #NeilPeartpic.twitter.com/B8tM4ZcIQQ

It is unbelievably sad to hear that my favorite drummer of all time, Neil Peart, has left us. Very hard to find words to properly express the level of inspiration & influence he had on so so many musicians. He will forever remain at the top of my list. Farewell to a true king. pic.twitter.com/A9QkSWg2f9

So much love and respect for Neil Peart. From his incredible playing, to his wonderful lyrics, for all the personal loss he had overcome, for being embarrassed by the trappings of fame, for his wit and humility and being a part of one of the greatest bands ever. Thank you so much https://t.co/OsMhfo4Y2B

The greatest of all time. RIP Neil Peart. I’m going to go raise a glass and then air-drum the shit out of Tom Sawyer. https://t.co/pL3xL4PUa0

R.I.P. To the drum legend/ lyricist extraordinaire known as Neal Peart!!!! Another rock icon/legend gone much too soon!!! Now he’s in the arms of his wife and daughter again!!!! Godspeed...😔🇨🇦 pic.twitter.com/Ai5w8nCLcH

Such a loss, one of my favorite musicians of all time. His influence and music will live on through anyone who picks up an instrument #neilpeart

What an incredibly sad moment. Neil, Geddy & Alex changed my life as a young aspiring musician. Condolences to the family and @rushtheband organization. https://t.co/FX6QtE8k4c

It absolutely breaks my heart to pieces to get the news of the passing of one of my greatest heroes of all time. #RIPNeilPeart My deepest condolences to the band, crew & family. Rest In Peace my friend. You will always be my hero 😓
For further thoughts: https://t.co/kg0StEx0EBpic.twitter.com/KnmalW5PLD

“We are deeply saddened by the news of Neil Peart’s untimely passing. On behalf of our entire team, we are proud to have worked with such an iconic, virtuosic drummer and we intend to honor Neil’s legacy as one of the greatest rock drummers of all time.” - John D'Addario III, CEO pic.twitter.com/RUJGYtlt04

Every drummer has “their guy” - the first drummer that inspired them to pick up the sticks, or the drummer that they’ve taken the most inspiration from (re: ripped off) over their career. I can’t begin to imagine how many drummers say that Neil Peart was “their guy.”

RIP Neil Peart.. this is too sad for words.... Thank you for your greatness Neil...#NeilPeart#Rush#riphttps://t.co/RhhIn9BKcY

RIP Neil Peart. A true artist and a sweet, good guy. And probably the most air drummed drummer of all time. This is my tribute...air drumming one of THE greatest, iconic drum moments in rock history. #neilpeart#rushhttps://t.co/01RW6pYWIl

RIP to a master 💔 #neilpearthttps://t.co/B8ssS79tRS

So bummed about this. When I first started playing, I remember purchasing his VHS video and playing it until the tape wore out. RIP Neil, you were and will always be a lengend!! https://t.co/hOsPAwJINa

I’m sorry to hear about the death of Neil Peart, fabulous drummer of great band Rush.

THIS IS A DIFFICULT ONE TO ACCEPT. PEACEFUL JOURNEY NEIL PEART & CONDOLENCES TO HIS FAMILY, THE MEMBERS OF RUSH AND THE LEGIONS OF FANS WORLDWIDE.

Very sad to hear about the passing of Neil Peart. He was a game changer and will be talked about for generations.

I’m deeply shocked and saddened by the news of one of my favorite drummers of all time has passed away today. Thank you...

News spreads faster than ever these days. Especially when an icon this influential passes. RIP Neil Peart. I’m positive...

I have no words for this Play Tom Sawyer in his honor and remember his greatness ....

RIP Neil Peart, there will always be something of you in all of us.

Neil Peart: a humble and intelligent man who inspired countless people in all walks of life to challenge themselves, work hard, and strive for greatness. A rare and deeply positive influence on past and future generations.

Neil. Thank you. From the bottom of my heart. ♥️

So sorry to hear the news of Neil Peart passing. We’ve lost another one of the greats. RIP. pic.twitter.com/hOr0x4hnDm