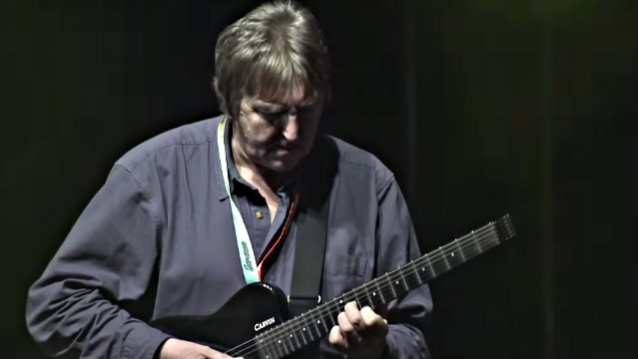 Members of DREAM THEATER, WHITESNAKE, LIVING COLOUR, JOURNEY and ARCH ENEMY are among the rock musicians and scores of other artists who reacted on social media to the passing of the groundbreaking British guitarist Allan Holdsworth.

The news of Holdsworth's death was broken by his daughter's Louise on her Facebook page earlier this evening. In a short statement, she said: "It is with heavy hearts that we notify everyone of the passing of our beloved father. We would appreciate privacy and time while we grieve the loss of our dad, grandad, friend and musical genius. We will update close friends and family when service arrangements have been made and will notify the public of an open memorial service, which all would be welcome. We are undeniably still in shock with his unexpected death and cannot begin to put into words the overwhelming sadness we are experiencing. He is missed tremendously. Louise, Sam, Emily & Rori."

Holdsworth, born in Bradford, England in 1946, embarked on a solo career as composer and bandleader exclusively in 1979. From 1982 through 2003, Holdsworth recorded a dozen albums that have documented his career as a producer, bandleader, and lead composer.

He further expanded the guitar's orchestral potential with a range of electronic effects, then moved on to become one of the early innovators of guitar-based synthesizer controllers. In the nearly five decades Holdsworth had been touring, collaborating, and recording, he created an immense sonic and musical legacy.

In the '70s, he played with legendary Miles Davis drummer Tony Williams and CREAM bassist Jack Bruce as the band LIFETIME, and toured with SOFT MACHINE. He worked with former YES and KING CRIMSON drummer Bill Bruford's first solo project, FEELS GOOD TO ME, and subsequent recordings with Jean-Luc Ponty and GONG. Bruford suggested Allan for the progressive-rock "supergroup" U.K., which, along with Bruford, also featured John Wetton and Eddie Jobson.

Holdsworth was working on a new solo album at the time of his death.

R.I.P. Allan Holdsworth. You remain an enormous inspiration to me. Your beautiful music will live on forever. pic.twitter.com/UEpuqCTm8s

Rest In Peace Allan Holdsworth--supreme brilliant innovator.
Click to help his family if you can--... https://t.co/ihadpOY0LU

It is with great sadness that we heard of the passing of Allan Holdsworth, wonderful talent and true Gentleman. R.I.P.

Devastated to hear of the passing of a legend! RIP Allan Holdsworth

I'm very saddened to hear about the death of Allan Holdsworth today. He was a huge influence on my playing as... https://t.co/gUzIYxlEjd

I cant believe it!
Allan Holdsworth, legendary guitarist of our generation !
He changed the game + was the sweetest guy ever...
RIP

Wow, just heard that Allan Holdsworth passed away. Another one of the greats is gone. RIP

Very sad to hear about the loss of Allan Holdsworth. We were just at NAMM together for ISP! A brilliant guitarist & innovator. God Bless you