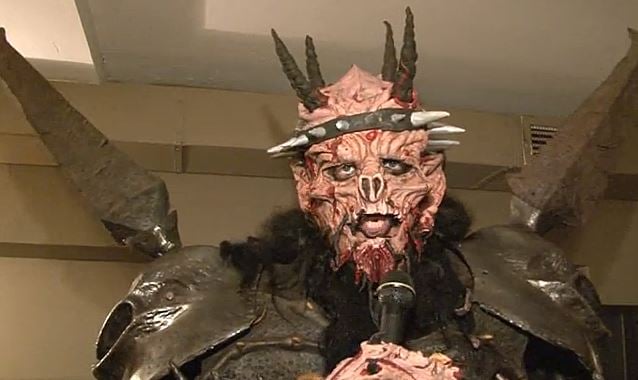 Richmond, Virginia CBS affiliate WTVR has posted a video report on the passing of Dave Brockie, who founded and fronted the theatrical shock rock band GWAR under the name Oderus Urungus. The three-and-half-minute clip features those closest to Brockie that were members of the extended GWAR family — from store managers to costume designers to former members of the band. Ex-GWAR guitarist Greg Ottinger states in the piece, which can be seen below: "Dave was a comet hurtling through space and pulling a whole collection of craziness behind him. And that's what we were — the tail."

Former GWAR bassist Mike Bishop told Style Weekly, "Dave was one of the funniest, smartest, most creative and energetic persons I've known. He was brash sometimes, always crass, irreverent, he was hilarious in every way. But he was also deeply intelligent and interested in life, history, politics and art."

Bishop added, "A great frontman, a great painter, writer, he was also a hell of a bass guitarist. I loved him. He was capable of great empathy and had a real sense of justice."

Brockie had been in a punk band named DEATH PIGGY that staged crude plays when he founded GWAR in 1984.

After meeting band member Hunter Jackson, who had created props for a film called "Scumdogs Of The Universe", Brockie used the outlandish costumes created for the film to form the joke group GWAAARRRGGHHLLLGH.

After numerous lineup changes and the shortening of the band name, Brockie dissolved DEATH PIGGY and led GWAR, which released its debut album, "Hell-O", in 1988.

The satirical metal band quickly earned a following for its macabre, over-the-top costumes, offensive lyrics and graphic, gore-soaked shows, in which the band members performed as the descendants of alien warriors who arrived on Earth to enslave and slaughter the human race.