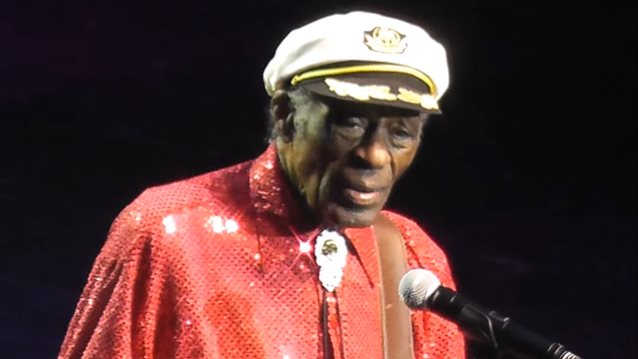 Members of GUNS N' ROSES, AEROSMITH, KISS, MÖTLEY CRÜE, TWISTED SISTER and JUDAS PRIEST are among the rock musicians and scores of other artists who reacted on social media to the passing of Chuck Berry, a music pioneer often called "the Father of Rock 'n' Roll," who died Saturday at his home outside St. Louis. He was 90 years old. Berry's death was confirmed by the St. Charles County Police Department in Missouri.

Officers responded to a medical emergency at Berry's home near Wentzville, Missouri, about 45 miles west of St. Louis, around 12:40 p.m. Saturday and found an unresponsive man inside. He was declared dead shortly before 1:30 p.m. after lifesaving measures were unsuccessful.

"St. Charles County police responded to a medical emergency on Buckner Road at approximately 12:40 p.m. today (Saturday, March 18)," the police department said in a statement. "Inside the home, first responders observed an unresponsive man and immediately administered lifesaving techniques. Unfortunately, the 90-year-old man could not be revived and was pronounced deceased at 1:26 p.m.

Berry, who influenced the likes of THE ROLLING STONES and THE BEATLES, announced last year he would release his first album in nearly four decades in 2017. He said the disc would be dedicated to his wife of 68 years, Themetta Berry. "My darlin', I'm growing old!" he said at the time. "I've worked on this record for a long time. Now I can hang up my shoes!"

Titled "Chuck", album will now reportedly be released posthumously. It will be the legend's first studio album since 1979's "Rock It".

Berry was one of the first people to be inducted into the Rock And Roll Hall Of Fame back in 1986 and he received a Grammy Lifetime Achievement Award in 1984.

Chuck Berry didn't build this house ... Chuck Berry created the things to build the house in the first place.

... @thebrentsmith on behalf of myself, @zmyersofficial @bkerchofficial, and @ebassprod... Thank you, for being one of the most influential pioneers of the art form the world has come to recognize, as #rocknroll R.I.P. Mr. Berry

Heart broken to hear of the passing of Chuck Berry. He was undisputedly the king. A moment of silence is idefinitely n order. RIP

RIP Chuck Berry. Without him Rock n Roll wouldn't be what it came to be.

My profound respect and admiration to one of the founding fathers of rock and roll, who sadly passed today -- the late, great CHUCK BERRY

RIP CHUCK BERRY. Truly a cornerstone of all that is, was and will be Rock and Roll. An icon like few others. https://t.co/4xdwGAOSDs

Hail Hail Chuck Berry!!! None of us would have been here without you. Rock on brother! https://t.co/tOMuQzUgPX

Guitar playing.
Songwriting
Stagecraft
ALL OF IT.
Chuck
Berry
?

To have stood on stage with Mr. Chuck Berry at the Apollo Theater is one of the great honors of my life. He gave... https://t.co/o48mEjdQ1t

RIP. Chuck Berry. I back him a few times in the 60s. LEGEND

I'm the desert and needed to stop as I just heard Chuck Berry passed:( R.I.P. Big part of Rock n Rock is gone..Very Thankful for his music. pic.twitter.com/QEZrVPorT1

Chuck Berry is dead. No words really. The smartest, most creative rock n roller in history. I totally owe my guitar style to him. RIP

The Rolling Stones are deeply saddened to hear of the passing of Chuck Berry. He was a true pioneer of rock'n'roll & a massive influence. pic.twitter.com/RT4NZH3KeQ

A true rock n roll master has left the building. A writer of the rule book from which we all follow. #RIPChuckBerry RHRF DOTF

Rock n roll would not be what it is today without the influence of @ChuckBerry! Thank God for his Rock and roll presence on this planet!

"If you tried to give rock and roll another name, you might call it 'Chuck Berry'" - John Lennon

Rest in Peace Chuck Berry....one of the original rock and roll guitar legends....thank you for the music!

RIP Chuck Berry. One of my early concerts as a teen was seeing you. I was awed then and that feeling has never waned.

When YOU have to create the TOOLS because they didn't exist.... you get this man #RIPChuckBerry pic.twitter.com/qAQxGx1owP

#RIPChuckBerry Thank You For Giving All Of Us Inspiration To Rock & Roll!!!! You are a TRUE American Icon!!!! #HailHailChuckBerry #RIP ? https://t.co/0NP4v3s9o2

Sad to hear of the passing of legendary rocker, Chuck Berry. Such an inspiration to so many. https://t.co/bevcymwMSK

I'm not sad however , it's hard to believe the pioneer of what I do has left this material place . Every night I... https://t.co/GPV2OHvUa8

RIP Chuck Berry. Was he the real king of rock n roll? https://t.co/7hhsqjLFv4

Love me some Chuck Berry!!!

R.I.P Chuck Berry.. You've left us with more than you will ever know!! You Rocked, We Roll!!

RIP #ChuckBerry, the genesis behind the great sound of rock n roll. All of us in rock have now lost our father. pic.twitter.com/VazeRI4VvM

Thanks for giving me and my friends something to do here. Rest In Peace ?#chuckberry #rocknroll https://t.co/iJNlWO1PMQ