A memorial celebration for legendary rock guitarist Ronnie Montrose will be held on January 23, 2016. The event, dubbed "Ronnie Montrose Remembered", will be held at the Observatory in Santa Ana, California and will feature many well-known rock musicians and artists coming together to pay homage to Ronnie and his music. Billed as a NAMM JAMM, the event will take place on the Saturday night of the upcoming NAMM convention.

Ronnie Montrose was a true pioneer of the electric guitar and was highly gifted and visionary in his craft. Ronnie helped influence generations of rock 'n' roll guitar players many of which have gone on to influence their own fans and followers worldwide. His career began in the early 1970s when he recorded and toured with artists such as Van Morrison, Boz Scaggs, and THE EDGAR WINTER GROUP. In 1973 he formed the band MONTROSE featuring singer Sammy Hagar, drummer Denny Carmassi and bassist Bill Church. The press hailed the new band as "America's answer to LED ZEPPELIN." The first MONTROSE record produced by Ted Templeman is still widely considered one of the most iconic and influential rock albums of all time.

A portion of the proceeds for this event will go towards helping musicians in need of medical assistance through Sweet Relief, a charity Montrose had stood behind whole-heartedly.

This one-time tribute concert to Ronnie Montrose's music will be an historical event featuring some of rock's biggest names performing songs from the early MONTROSE records as wells as from THE EDGAR WINTER GROUP, Van Morrison, GAMMA, and Ronnie Montrose solo records. The artists performing will be officially announced on the coming weeks. 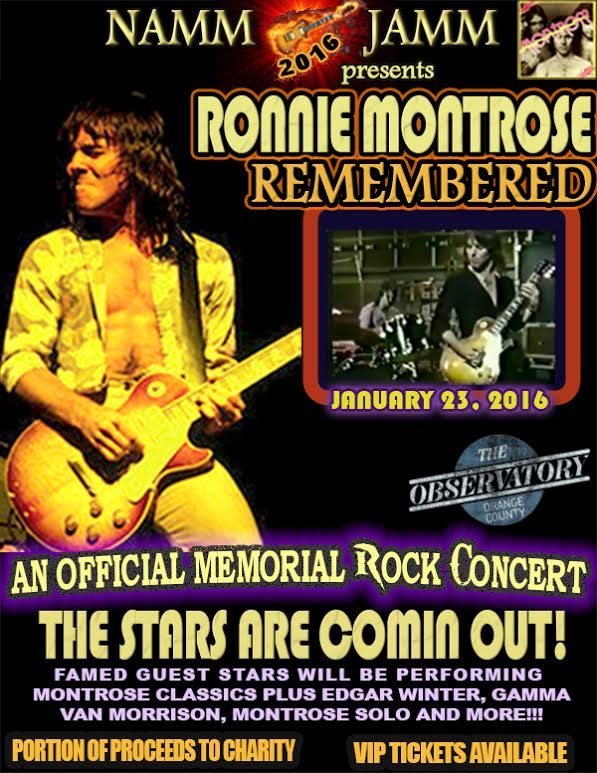