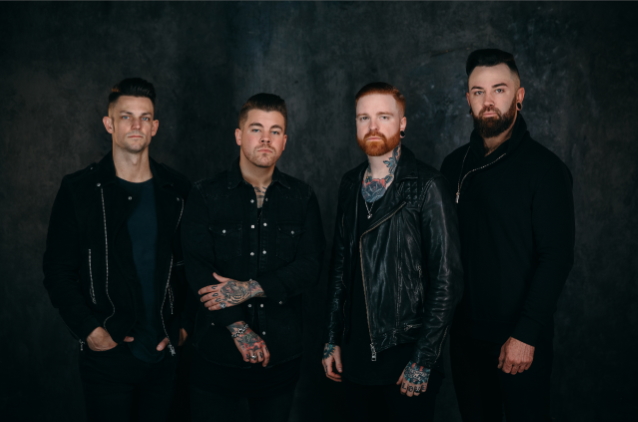 MEMPHIS MAY FIRE has always made anthems for the broken. The band's explosive new single, "Blood & Water", is firmly in keeping with this tradition.

The official music video for the song, which finds the band in performance mode and exuding crackling and frenetic energy, can be seen below.

"With everything that's happened over the last year, it feels surreal to be releasing new music," says singer Matty Mullins, offering insight into both the song and the band's creative headspace. "Creating during a pandemic came with a lot of challenges. But looking back, I think we needed that time off the road to fall in love with writing songs again. 'Blood & Water' is just a taste of what's to come and we couldn't be more excited for the world to finally hear it."

In other news, MEMPHIS MAY FIRE has launched two new merch designs, which are available here. 100% of the profits of one of the new designs will be donated to Bridges DVC Nashville, which serves women, men and their children affected by domestic violence, ensuring a safe transition to successful independent living. Bridges is breaking the cycle of domestic violence in the greater Nashville area by responding directly to the scene of an assault to offer immediate support, education and networking with other agencies.

Over the course of its career, MEMPHIS MAY FIRE has channeled a generation's worth of angst, frustration, and pain, with a focused blend of gigantic melodic hooks and crushing aggression. Even after topping Billboard's Hard Music Albums chart, having an album debut at No. 4 on the Billboard Top 200, and breaking into radio's Active Rock Top 20, MEMPHIS MAY FIRE refuses to sacrifice who they are or the people who made them.

A new season unfolds for the band, and it's filled with revitalization and renewal. Stripping things down to their core elements, hearkening back to the days when they created the music their fans most cherish, MEMPHIS MAY FIRE rekindled the spark within to build an inferno of riffs and inspirational words. They have returned to their roots with the seasoned polish earned through years of touring and making music together. "Blood & Water" is proof positive of this fact.

MEMPHIS MAY FIRE has toured with a vast list of important rock and metal acts that include KILLSWITCH ENGAGE, SLEEPING WITH SIRENS, BLACK VEIL BRIDES, SEVENDUST and ATREYU. They've co-headlined with YELLOWCARD and THE DEVIL WEARS PRADA, regularly appeared on Warped Tour, and at major rock festivals. The band's previous six albums' continued relevance is a testament to the energized connectivity between the band and their audience. Songs like "Miles Away", "No Ordinary Love", "Beneath The Skin" and "Carry On" account for 100 million views and millions of streams.

Find more on Memphis may fire