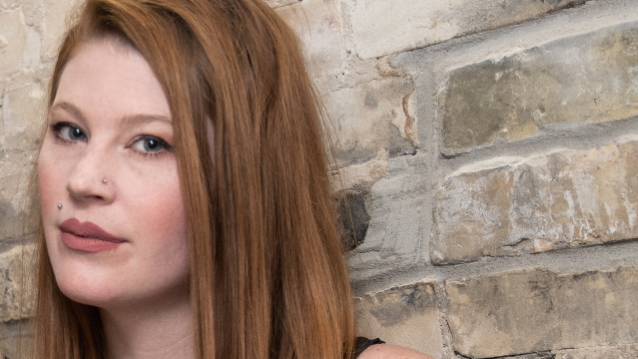 Mercedes Lander says that it would be "hard" for KITTIE to continue without the band's late bassist Trish Doan.

After the London, Ontario, Canada-based metallers completed the touring cycle for 2011's "I've Failed You" album, KITTIE entered a long period of inactivity during which the drummer worked in real estate and more recently at a software company, while her sister, guitarist/vocalist Morgan Lander focused on a marketing job for a chain of fitness clubs. The group also began work on a career-spanning documentary, "Origins/Evolutions", which finally saw the light of day in 2018 via Lightyear Entertainment in North America.

Asked in a new interview with the "Thunder Underground" podcast if there are any plans for KITTIE to do anything at some point in the future, Mercedes said (hear audio below): "I know that we're lucky to have the experiences that we have had. And we had a really amazing time when we did that 'Live In London' show a couple of years, where we brought everybody back that wanted to come back. And we did like a 'travel through time' with all the different members and stuff like that. So that was really cool. We had a lot of fun doing that. But at this point, unless we got a really good offer… I don't think we would do anything unless it was a really great offer and we could include everyone, in one fashion or another. And I think because at this point, we're kind of one of those legacy bands, I feel like it would probably really help, or it would be really cool, if we could something with some of the past members as well. 'Cause right now, we don't necessarily have… I mean, besides my sister, myself and Tara [McLeod, guitar], it's just the three of us, technically, in the band.

"It's kind of hard for us to continue on without Trish, because it would feel kind of weird not to have her there," she continued. "So there's a lot of stuff going on with that. But you never know what might happen. If somebody decides that they wanna give us a good offer, and it works out for us, and it's feasible for us and we're able to do it, I don't see why not. But at the same time, we wanna make sure that things are good for the fans as well. We wanna make sure that the people that are coming to the show are getting a good experience, 'cause it might be the last time. [Laughs] We don't wanna shortchange anybody and have a 'lesser than' experience, if that makes sense — we wanna make sure that everybody that comes to a show gets blown away. So we kind of have to outdo ourselves.

"But we'll see what happens. You never know," she added. "The documentary is on Amazon Prime right now, and people are losing their mind. Our Instagram and our Twitter and all of our other social media has basically exploded since the documentary got added to Amazon Prime, I guess, like a month or two ago."