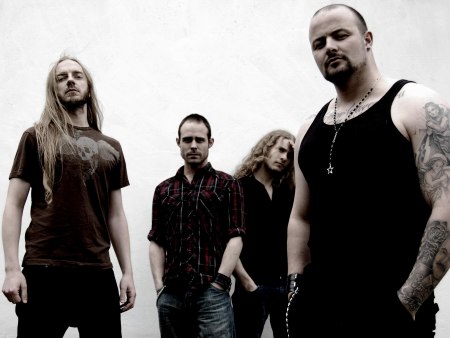 According to a press release, "the new incarnation of MERCENARY displays a newfound musical focus, appetite and maturity, and while the material is now heavier and faster, it still features the characteristic clean vocals, catchy choruses and atmospheric keyboards and samples. (Keyboards provided by guest musician Kim Olesen of ANUBIS GATE)."

MERCENARY in January announced the addition of drummer Morten Løwe Sørensen (THE ARCANE ORDER, SUBMISSION, SLUGS) to the group's ranks. The band has also revealed that all lead vocals going forward will be handled by MERCENARY bassist/vocalist René Pedersen following the departure of singer Mikkel Sandager. The group says, "As everybody who has seen us live in the last couple of years is fully aware of, René is a real powerhouse, and he has so much more under his belt than he got to display on the previous album."

MERCENARY's last album, "Architect of Lies", was released in 2008 through Century Media Records. Featuring artwork by Niklas Sundin (ARCH ENEMY, DARK TRANQUILLITY),"Architect of Lies" was made available as a regular CD and a special limited-edition version featuring the bonus track "Death Connection" and a bonus DVD containing live footage filmed at Bang Your Head!!! festival 2007 and Summer Nights festival 2007, a detailed studio report and the promo video for "My World Is Ending".