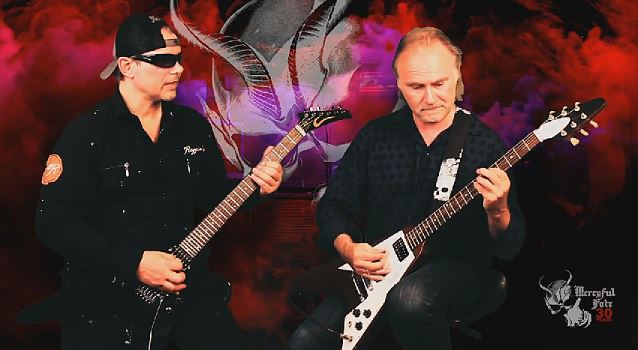 Part two of a new video of MERCYFUL FATE guitarists Hank Shermann and Michael Denner playing the band's classic "Don't Break The Oath" album to celebrate the LP's 30th anniversary can be seen below.

Says Shermann: "With the overwhelming feedback from the 'Melissa' 30-year anniversary video [which was released last year], it was obvious that [we] were going to do the same event with 'Don't Break The Oath'.

"We think the fans like to see how it's really played by the original guitar players, so we tuned and tweaked the guitars and amps as we did back in 1984. This is as close as you'll get it."

Highlights of all songs were performed live with two guitars and two amps.

Said Shermann: "Besides working with our own respective bands, SHERMANN TANK and DENNERS TRICKBAG, we now have the opportunity to extend the collaboration we started with MERCYFUL FATE in the early '80s."

Added Michael: "Yeah, we're super excited to play together again and get the twin guitars into action once more."