Swedish experimental extreme metallers MESHUGGAH will embark on a European tour in the winter. Main support on the trek will come from U.S. metallers HIGH ON FIRE.

Tickets go on sale on Tuesday, May 17.

The European headlining tour will follow the release of MESHUGGAH's highly anticipated new album, expected this autumn. A teaser for the effort is available below.

In a 2015 interview with RockSverige.se, MESHUGGAH guitarist Mårten Hagström revealed that he hasn't been checking out any new music for inspiration while working on the band's next album. He said: "Since we're in writing mode now, I don't listen to music, basically, at all. Not because 'I'm not gonna listen to music,' but it's just that… When you've got a lot of stuff to do… You know, I pick up the kid, go home, feed him, put him to bed, and then it's time for me to work, and I sit and play guitar for… whatever… many hours and try to make some new music, it's not like I'm gonna kick back and put on an album, regardless of style. But I listen to a lot of stuff; we all do. We don't listen to the same stuff, but we spread a lot. So we listen to metal, we listen to… anything, basically."

In 2014, MESHUGGAH was awarded an exclusive scholarship for its services to the Swedish and international music scene. The musicians were presented with the scholarship and diploma by SKAP president Alfons Karabuda at an intimate event in the south side of Stockholm in December.

"The Ophidian Trek" was MESHUGGAH's second live DVD, the first being 2010's "Alive", which debuted at position No. 8 on the Billboard Music DVD chart. 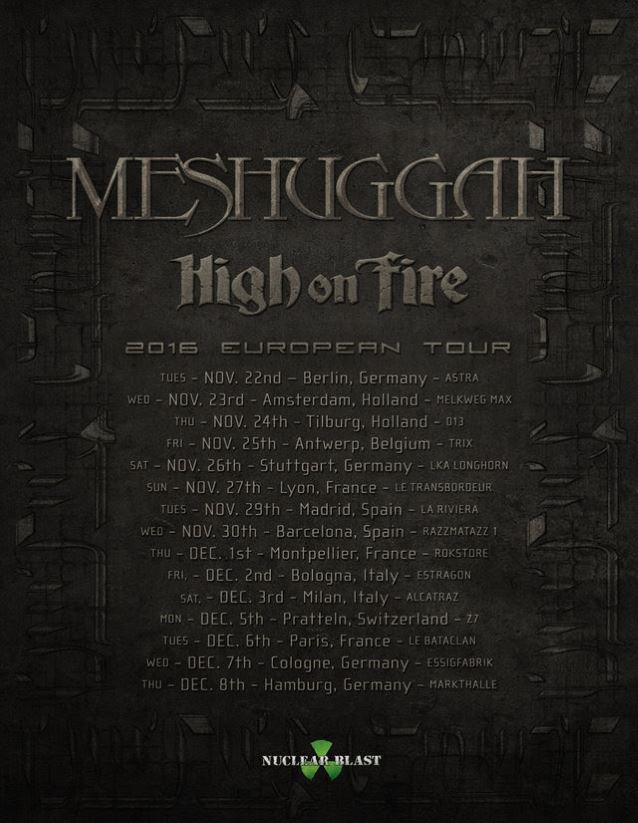