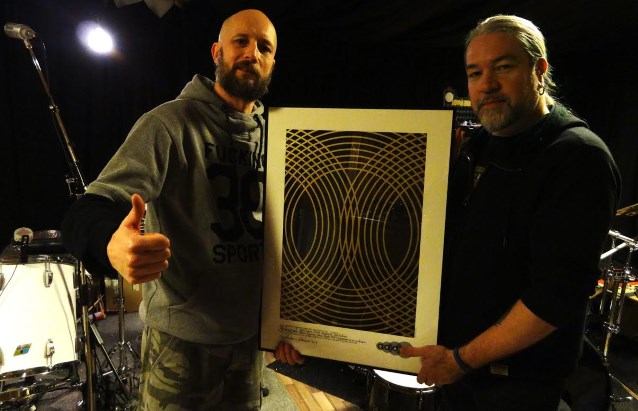 Every year SKAP awards scholarships and prizes to celebrate Swedish creativity across all musical genres. The awards ceremony takes place in tandem with SKAP's annual spring party which is organized with the composers in mind and creativity as the main focus.

In 2014, Swedish progressive metallers MESHUGGAH were awarded an exclusive scholarship for their services to the Swedish and international music scene. The musicians were presented with the scholarship and diploma by SKAP president Alfons Karabuda at an intimate event in the south side of Stockholm in December.

Said MESHUGGAH singer Jens Kidman: "We are very happy to be acknowledged this way. The SKAP prize was a bright surprise in an otherwise dark time of the year. Thanks, SKAP!"

Asked what MESHUGGAH has been up to the last few months, the band's guitarist, guitarist Mårten Hagström, told Nev Pearce of Australia's "Rabid Noise" podcast last November: "We've been touring up until July this summer when we stopped doing the first leg of our 25th-anniversary touring that we kicked off. We finished off the 'Koloss' touring for 'The Ophidian Trek', and then we went into doing some shows to kind of commemorate the fact that we're old fuckers now and have been around for too long. That's what we've been up to. And then we've been wrapping things up for this album and taking care of some things on the administrative side that are not so fun to take care of. And then, right now, we're starting to get back into some kind of writing mode. It's early stages yet, but we're messing around with new ideas and stuff."

Regarding what stage of the writing process MESHUGGAH is in right now for the follow-up to 2012's "Koloss", Mårten said: "[We're] mainly just sending stuff back and forth. I've been sitting down the last few weeks at home working by himself. I know Tomas [Haake, drums] has been working a little bit with Dick [Lövgren, bass], but mostly by himself as well. And that's generally how it goes for us. I mean, it doesn't get to be, kind of, a band effort until we've got something to stand on, some ideas and some half songs here and there that we can all dig into, cool stuff that might make it to the next album. And then everybody gets into the process and then it gets snowballing from there, it gets bigger and bigger real fast. But the early stages are always real slow, and that's where we're at now. But we're not rushing anything. We've got the final leg of the 25-year-anniversary thing going on in December in Europe, so we're actually planning and preparing a bit for that as well."

MESHUGGAH in June returned to North America for a tour celebrating the band's 25th anniversary. Opening for them was North Carolina's BETWEEN THE BURIED AND ME.