MESHUGGAH has postponed its previously announced U.S. tour, originally planned for early 2022, to September/October 2022. The new dates will kick off on September 16 in Worcester, Massachusetts and conclude on October 16 in Atlanta.

The Swedish extreme tech-metal pioneers announced the postponement in a social media post earlier today. They wrote: "We regret to inform that MESHUGGAH will have to reschedule their U.S. headline tour.

"While the ongoing pandemic has been throwing various curve balls on us all the past year, ultimately delaying the completion of the upcoming MESHUGGAH studio album - there are other concerns that have forced us to make this unfortunate decision. Determining factor is the need to prioritize the physical health of one of the band members who is currently undergoing medical treatment related to a skin condition on his hands, hindering him from rehearsals and from all in all playing his instrument. While we are optimistic for his future recovery we know it will not be possible for him and the band to be ready to perform already in February 2022.

"With these shows now moving, CONVERGE will unfortunately no longer be able to do the tour. However we are grateful that TORCHE will still be performing with us. Another special guest to replace CONVERGE and to complete the bill is to be announced.

"Tickets will remain valid from the original dates, please contact your ticket provider with any queries."

MESHUGGAH's latest album, "The Violent Sleep Of Reason", came out in 2016 and resulted in a "Best Metal Performance" Grammy nomination for the song "Clockworks". The disc was produced by the band and was engineered by Tue Madsen of Puk Studios in Kaerby, Denmark.

In October 2020, MESHUGGAH drummer Tomas Haake confirmed to Knotfest.com's "Mosh Talks With Beez" that the band had spent much of the downtime during the COVID-19 pandemic working on fresh material.

Regarding the musical direction of the new MESHUGGAH songs, Tomas said: "Of course, we have a certain framework that we still wanna sound like MESHUGGAH, we wanna have that signature sound, we want people to be able to — even if they haven't heard the song [before] — in the best-case scenario, it's, like, 'Oh, that's gotta be MESHUGGAH,' even if it's a brand new thing. So hopefully that's something we're aiming at. But with that said, as far as the music goes, we try to [do] kind of the opposite of what AC/DC has been doing for 40 years. So we're not trying to write the same album over and over. And whether we succeed with that or not, that's more up to our fans and other people, but that's definitely the aim. We try our best to kind of find new grips within the framework of what we're supposed to be, I guess. 'Cause we don't wanna really step out of that either. We're not looking to be another band all of a sudden or something that we haven't been or that is not true to kind of what we're doing."

Haake said that MESHUGGAH has fared better during the coronavirus-related music shutdown than most other artists.

"We know a lot of bands that just had their album out or just finished something and were just about to go on tour, and this [pandemic] happened," he said. "So, of course, we feel with 'em — that's no fun. We were fortunate enough [in that] we just kind of finished the tour run for [MESHUGGAH's last album] 'The Violent Sleep Of Reason', so we're just writing. We played a lot the last few years, so we had a good amount of cash in the bank to keep us afloat for a while, so we've been really fortunate in all this compared to a lot of bands that are just — they're done. What are they supposed to do?"

We regret to inform that MESHUGGAH will have to reschedule their U.S. headline tour, originally planned for early 2022,... 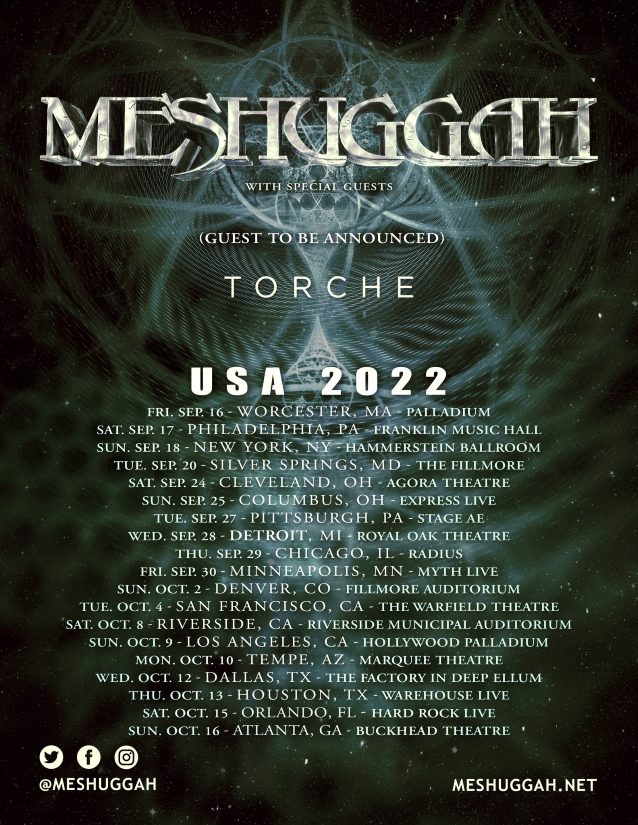