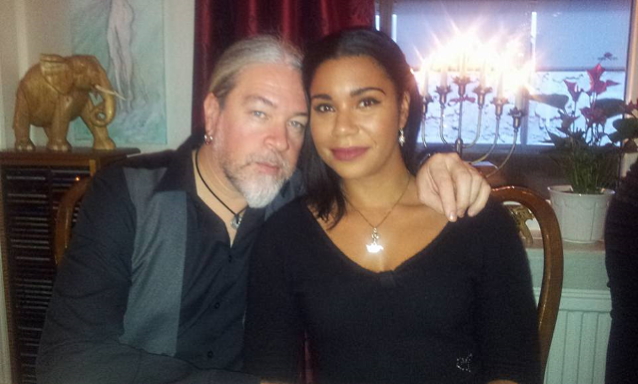 Jessica Pimentel, the American actress best known for her role as Maria Ruiz on the Netflix original series "Orange Is The New Black", says that she is working on new music with her fiancé, MESHUGGAH drummer Tomas Haake.

Pimentel, who is also the longtime frontwoman of the New York-based metal band ALEKHINE'S GUN, discussed her collaboration with her husband-to-be during an appearance on the latest episode of the "Behind The Vinyl" podcast.

Asked if she and Tomas ever write any music together, Jessica said (hear audio below): "That's a very funny thing. [Laughs] We have been wanting to jam for a long time. It's, like, you know the 'meeting your heroes' situation? We are both, like, 'God, I love the way you play. It sounds really great.' 'Oh, I love the way… You wanna jam?' 'Yeah. Yeah.' 'Eh, tomorrow.' [Laughs]

"It's kind of just been the two of us for the last two months here, so we both really need to play, and so we're gonna do some of that," she continued. "We also have the honor and luxury of having some nice, new Korg keyboards here, so maybe what we jam out might not be metal at all. He's actually picking up the wires for that right now — all the cables that we need — and we'll see what comes out. We already have our anonymous band name to release stuff on Bandcamp. We're not gonna tell you what it is, you're not gonna know what it is, but it will be out there."

In a 2017 interview with WBEZ, Jessica spoke about how she was first introduced to heavy metal. She said: "I mean, it was kind of a natural progression. I had the radio on, and you have top 40 radio, and then you hear things that are a little 'heavier,' like BON JOVI or something like that. And then one day you mess up and you turn the dial a little bit, and you turn to a classic rock station, and you hear Jimi Hendrix, and THE DOORS and BLACK SABBATH, and then Joan Jett, and it just spiraled down from there. One day my friend handed me an album and said, 'I think you'd really like this since you like violins,' and it was KING DIAMOND's 'Conspiracy'. KING DIAMOND is this Danish band. When I first put it on, it started with these cellos and strings, and it was so gorgeous and lovely. And he started singing in this haunting operatic voice. It wasn't a scary death-metal voice, but the subject matter was terrifying. I was 12 years old and I couldn't go near my closet for two weeks; I was so scared of the story. It was mindblowing."

Earlier this month, ALEKHINE'S GUN released a new single titled "21". The song is the band's first new material in six years, since the release of its 2014 heralded breakout EP "...And Kings Will Fall", and will be featured on a forthcoming EP, "Year Of The Lazerus", that's due out at a future date. Details of the release are forthcoming.