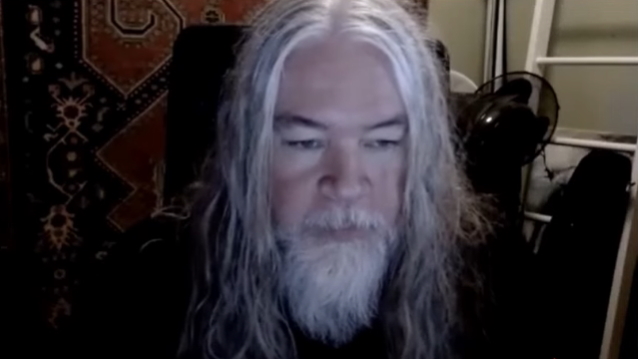 MESHUGGAH's TOMAS HAAKE: 'I Definitely Am Not The Drummer I Was When I Was 30'

In a recent interview with Finland's Chaoszine, MESHUGGAH's Tomas Haake was asked if playing the drums in such a physically demanding style becomes more difficult as he gets older. The 50-year-old Swedish musician responded (as transcribed by BLABBERMOUTH.NET). "You definitely feel it; there's no doubt. I definitely am not the drummer I was when I was 30 and I'm not physically as capable as I was when I was 30 years old. But you can still… Now I had a year since I played drums [after recording the latest MESHUGGAH album], so, obviously, the first few times you rehearse, it's, like, 'Ahhh…' A few songs into it, you're, like, 'My heart.' You feel it. But it's still surprising how fast you get back into it, and I'm already starting to feel a lot better. Another month of rehearsal, and I think I'll feel pretty solid. But you do think about things, as far as ergonomics and stuff like that. And over the last, like, 10, 12, 13 years, that's something I've been doing with the drum kit too, to kind of make sure that I'm not reaching too high or too far back or that it's something that is gonna mess with me. 'Cause I already did have shoulder impingement in both shoulders back in 2005 and [200]6, and I don't wanna get back to that again. So it comes down to ergonomics as well. And you try to place everything around you. As far as the kick goes, you try to kind of make it so you don't have to use extra effort just to kind of reach that cymbal or hit that thing or hit that thing. So you do think about those kind of things as well, obviously. It's not only a matter of your physical ability to perform a live set; it's about the little things as well."

MESHUGGAH's ninth studio album, "Immutable", was released on April 1 via Atomic Fire. The follow-up to 2016's "The Violent Sleep Of Reason" was recorded at Sweetspot Studios in Halmstad, Sweden; mixed by Rickard Bengtsson and Staffan Karlsson; and mastered by multiple Grammy Award winner Vlado Meller (METALLICA, RAGE AGAINST THE MACHINE, RED HOT CHILI PEPPERS, SYSTEM OF A DOWN). Visionary artist Luminokaya once again created the cover artwork.

Last December, MESHUGGAH announced that it was postponing its previously announced U.S. tour, originally planned for early 2022, to September/October 2022. At the time, the Swedish extreme tech-metal pioneers said that they needed "to prioritize the physical health of one of the band members who is currently undergoing medical treatment related to a skin condition on his hands, hindering him from rehearsals and from all in all playing his instrument." Haake has since confirmed to Rolling Stone that he is suffering from hand eczema. "I've got to tape up all my fingers and put on gloves just to mess around on the kit, even," he explained. "That means I haven't really touched the drums since we recorded the album, and that was, like, early April. So I'm almost a year out, without even hitting a drum."

Last month, Haake told Metal Injection that his condition was improving after he talked to a nutritionist. "I don't know how many doctors and places I've been to since this started, and we've done all the tests that you can do as far as contact eczema and on your back, all those patches and stuff like that — I did that twice," he said. "And I went to a psoriasis place — they thought initially that it was psoriasis related — so I had 30 sessions of UV light kind of sessions for my hands. Nothing helped; nothing had done anything. So a buddy of mine, a drummer buddy here in Stockholm, suggested I talk to this guy that he knew who is a nutritionist for one of the soccer teams here in Stockholm. And so I called him up and we spoke, like, probably about an hour and a half and I described how it all started and what kind of life I live and all that stuff. And he basically told me, 'Start eating Q10, coenzyme Q10 (CoQ10),because I think there might be something there. You're not producing this stuff enough, and that will have an effect.' 'Cause I also started losing my hair and stuff like that way faster than I had been. So I figured this is connected. And I've known, or felt, all along that this was not contact allergy related at all, because I tried everything. I used these cotton gloves for months on end. As soon as I was touching anything, like as far as keyboard mouse, anything that you would come in touch with on a daily basis, I was using gloves and it didn't do any difference either. So my belief was always more that it's internal something. And actually after now — this is day number five or six of taking Q10, and it's way, way better. So, knock on wood, but if it keeps going like this, it's definitely going the right way, for sure."