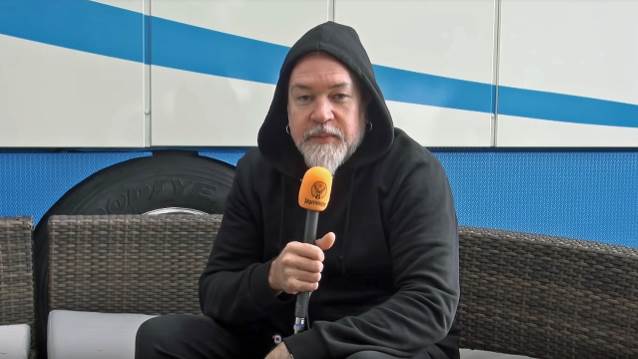 MESHUGGAH drummer Tomas Haake spoke to Finland's Kaaos TV about the recent passing of PANTERA and HELLYEAH drummer Vinnie Paul Abbott. He said: "I was stunned at first. Obviously, he was way too young — only 54, I think. Yeah, it definitely came as a shock. I mean, I don't know him that well, but, of course, over the years, we have run into each other and we have hung out and had beers and talked about life and music and stuff. So it's definitely a sad loss. And what can you say? Too early."

Haake went on to say that the first time he "actually met and hung out with" Vinnie Paul "and talked to him" was around nine or 10 years ago in Australia. And although MESHUGGAH never toured with either PANTERA or HELLYEAH, "we have run into [HELLYEAH] and we played a lot of the same stages around the same time at festivals and stuff like that," Tomas said. "So we definitely ran into them a bunch of times."

According to Haake, PANTERA's music had a "huge" influence on MESHUGGAH in the early years of the Swedish band's career. "I mean, during the grunge years, if you wanna call it that, early '90s, where metal kind of just dipped down and there was not much going on, you had METALLICA, of course, 'cause they were always big, but other than METALLICA, PANTERA was the only band that kind of just got stronger through those years. And for us, early on in our career, they had a huge impact. Of course. Definitely."

Asked what, in his opinion, made PANTERA's music so special, Tomas said: "I don't know. They certainly had a unique style of drumming, unique guitar playing, unique vocals — the best metal singer, probably, on the planet. So just the combination. The songwriting was excellent. It was really brutal, beatdown music and had little hints of hardcore, a little bit of older hard rock, if you look at their early years, before the [major-label] PANTERA stuff. So, I don't know… It was just a really cool mix. Also, their productions really kind of stood out and everything was really clear — you could really hear everything. So [it was] just a combination of all those things that made PANTERA a great band."

Haake also talked specifically about Vinnie Paul's drumming during his time with PANTERA, saying: "That was one of the things that stood out early on too. He had some things that he did, both with his feet and hands, that were kind of a new thing and that I think a whole generation of drummers kind of snipped off on and started using a little bit — where you do, like, three hits on two bass drums, and stuff like that. So definitely signature Vinnie Paul stuff. They basically shaped a whole generation of musicians, for sure, in metal — there's no doubt."

Haake said last month that fans shouldn't expect to see a new MESHUGGAH studio album from before "2020 at the earliest."

Vinnie passed away on June 22 at his home in Las Vegas. He was buried on Saturday (June 30) next to his brother and their mother, Carolyn, at Moore Memorial Gardens cemetery in Arlington, Texas.