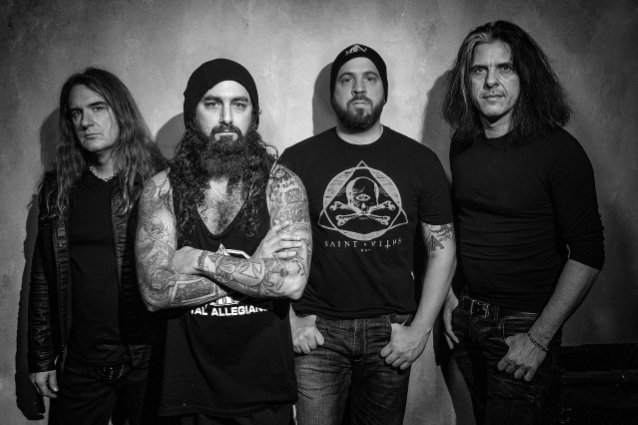 METAL ALLEGIANCE — with its four core members: David Ellefson (MEGADETH),Alex Skolnick (TESTAMENT),Mike Portnoy (THE WINERY DOGS, ex-DREAM THEATER) and Mark Menghi — began as a celebration of heavy metal, powered by the almost tribal bond shared between the extreme music community's most revered trailblazers, armed with a list of contributors onstage (and off) that read like a Wikipedia entry on the genre itself.

The band will release its sophomore album, "Volume II - Power Drunk Majesty", on September 7 via Nuclear Blast Entertainment. The thrash-worshiping disc merges old-school legends with the modern metallers of the scene to produce groove-driven, adrenaline-soaked anthems while tackling the frustrating state of the world.

Alex Skolnick comments: "Bringing in John Bush to sing on 'Bound By Silence' feels like a real coup. He has the perfect voice for this track musically, as well as the ability capture the intensity of the lyrics in terms of storytelling. A great addition the the METAL ALLEGIANCE family."

Mark Menghi states: "'Bound By Silence' tells the true tale of an amazing Vietnam War vet, a brave soul who told me his incredible story with only a few months left to live due to pancreatic cancer. It's a very personal song to me. I've since come to learn he recently passed on while leaving a great legacy behind. Forever bound by silence."