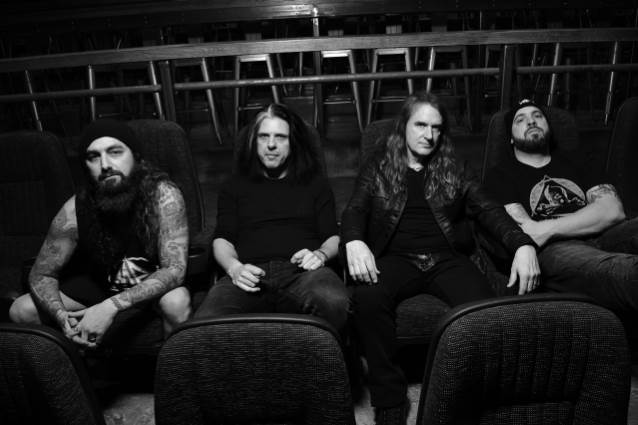 METAL ALLEGIANCE — with its four core members: David Ellefson (MEGADETH),Alex Skolnick (TESTAMENT),Mike Portnoy (THE WINERY DOGS, ex-DREAM THEATER) and Mark Menghi — began as a celebration of heavy metal, powered by the almost tribal bond shared between the extreme music community's most revered trailblazers, armed with a list of contributors onstage (and off) that read like a Wikipedia entry on the genre itself.

The band will release its sophomore album, "Volume II - Power Drunk Majesty", on September 7 via Nuclear Blast Entertainment. The thrash-worshiping disc merges old-school legends with the modern metallers of the scene to produce groove-driven, adrenaline-soaked anthems while tackling the frustrating state of the world.

In the first trailer for "Volume II - Power Drunk Majesty", the core four members discuss the differences between their debut album and the follow-up effort.

Skolnick comments: "The first time around we were kids in a candy store. We could do whatever we wanted — all different eras, all different types of influences. We did go in a few different directions on this album, but not quite as many. This time, I think we have a much better sense of what type of songs really fit the project."

The official video for the first single from the disc, "Mother Of Sin", featuring Ellsworth, can be seen below.