METALLICA will bring the "WorldWired" full-on stadium experience to South America for six headlining shows featuring special guests GRETA VAN FLEET. The perks of METALLICA's current tour will be in place, including the "Wherever I May Roam" Black Ticket and Enhanced Experiences brought to you by CID Entertainment.

Tickets for all four Brazil dates will be available for online purchase beginning Thursday, August 22 at 10:00 a.m. local time, with the box office on sale following at 12:00 noon local.

According to Billboard's Boxscore data, the summer 2019 leg of METALLICA's "WorldWired" tour grossed more than $70 million from 13 shows. The highest-earning date ($8,194,075) took place on June 8 in Meath, Ireland, where a near-capacity crowd of 71,122 saw the band perform at the iconic venue Slane Castle. The second-biggest concert ($6,745,329) happened on July 6 in Berlin, Germany, where 68,452 fans were packed into the sold-out Olympiastadion.

The group's 21 North American "WorldWired" arena shows during the reporting period grossed a total of $41.7 million, good for an average per-show gross of $1.99 million. With an average attendance of more than 16,000, the band moved nearly 350,000 tickets altogether.

On a per-show basis, METALLICA did even better internationally, as five of the six European stadium concerts the group performed in May grossed a combined $28 million thanks to an average attendance of more than 58,000. Altogether, the band grossed $69.7 million in the six-month reporting period, making the group the fourth highest-grossing act in the world during that time behind only Elton John, Pink and Justin Timberlake — each of whom sold fewer tickets but had a higher average ticket price. 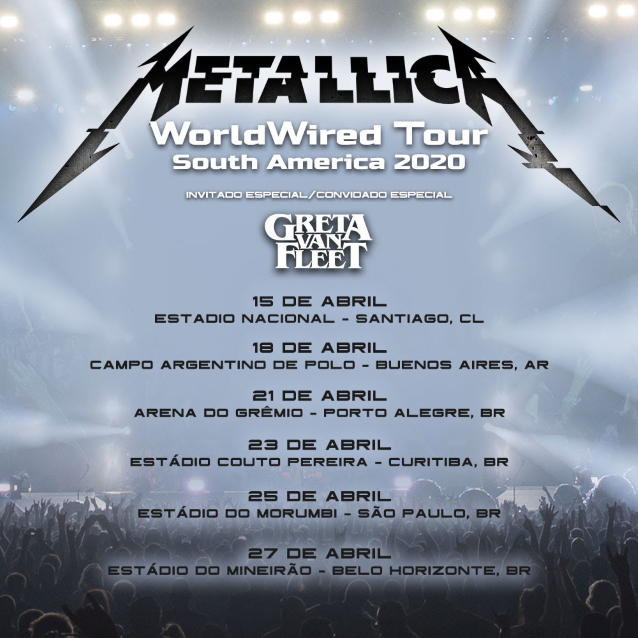