METALLICA's South American tour, which was originally planned for April, has been rescheduled for December. Support on the trek will come from GRETA VAN FLEET.

METALLICA states: "We're excited that we'll still be able to visit this year, so please hold onto your tickets for the originally scheduled shows & visit the ticketing service for additional details or refund info if you can't make it.

"We wish you, your friends and families, and the extended 'TALLICA family around the world the very best during these difficult times. Stay home, stay safe, and we’ll catch you in December!"

Regarding the decision to postpone the South American tour, METALLICA said: "As many of you know, in our nearly forty years of touring, we've had a few mishaps along the way; broken bones, trashed appendixes, a pyro mishap, backs thrown out, crazy weather, food poisoning (beware of the oysters!) and even one way next-level anxiety attack! None of it has ever stopped us, but this is obviously a very different time and leaving the house now literally means taking your life in your hands. Unfortunately, in these surreal times that means we have to stay away from each other for the foreseeable future before we can start thinking about 'TALLICA family reunions around the world. We're all putting safety first, self-isolating and socially distancing, but not forever!"

As previously reported, METALLICA's appearances at three Danny Wimmer Presents-produced festivals in May have been canceled: Epicenter in Charlotte, Welcome To Rockville in Daytona and Sonic Temple in Columbus.

Last December, Billboard reported that METALLICA was the highest-ranked hard rock act on the magazine's year-end Boxscore chart, with a combined gross of $177 million from 46 concerts during the band's ongoing "WorldWired" tour. The band sold 1.7 million tickets around the world during the 12-month time frame that determined the chart's rankings.

To mark the 20th anniversary of METALLICA's first performance with the San Francisco Symphony, which resulted in the live "S&M" album and video, the band re-teamed with the symphony in September for two shows for the grand opening of Chase Center, the new home of the Golden State Warriors. A film of the concerts, called "S&M²", arrived in theaters worldwide in October. 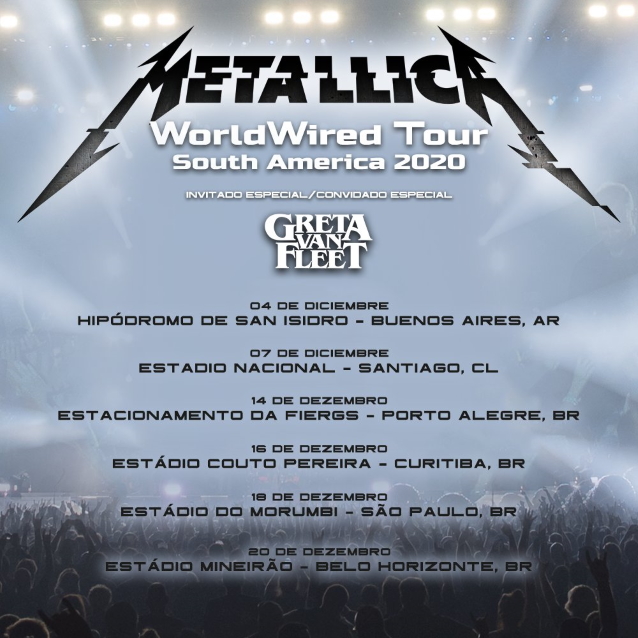