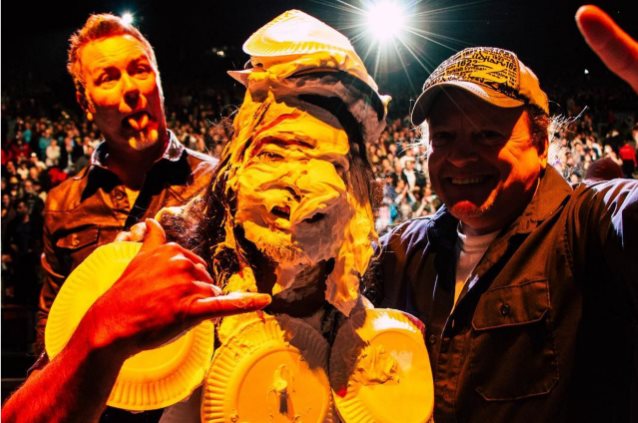 METALLICA Bassist Gets Covered In Pies For His 52nd Birthday

METALLICA played another rare, nine-song acoustic set on Sunday night (October 23) during Neil Young's 30th anniversary Bridge School benefit concert at the Shoreline Amphitheater in Mountain View, California. The band performed acoustic versions of both its own hits and some surprising covers, including THE CLASH's "Clampdown", DEEP PURPLE's "When A Blind Man Cries" and BUFFALO SPRINGFIELD's "Mr. Soul" featuring Young himself.

Also featured in the set were "Whiskey In The Jar", "Nothing Else Matters", "Bleeding Me" and new song "Hardwired".

In addition, they celebrated METALLICA bassist Robert Trujillo's 52nd birthday at the event by covering him in cream pies.

Also performing at the all-acoustic charity event were Young himself, CAGE THE ELEPHANT, MY MORNING JACKET, Roger Waters, Dave Matthews, Willie Nelson and others.

METALLICA and the other acts also performed one day earlier (October 22) for the first day of the event.

METALLICA previously appeared at the 1997 and 2007 installments of the concert.

In other news, METALLICA will play its first-ever show in Hong Kong on January 20, 2017 at AsiaWorld Expo. The gig will be part of the band's 2017 world tour in support of its tenth studio album, "Hardwired... To Self-Destruct", due out November 18.

Thanks to Mr. Neil Young for letting us play #Bridge30! We had a great time! ??? #metallica #neilyoung #mrsoul

Even Neil Young got in on Robert's birthday celebration! ??? #MetAtBridgeSchool