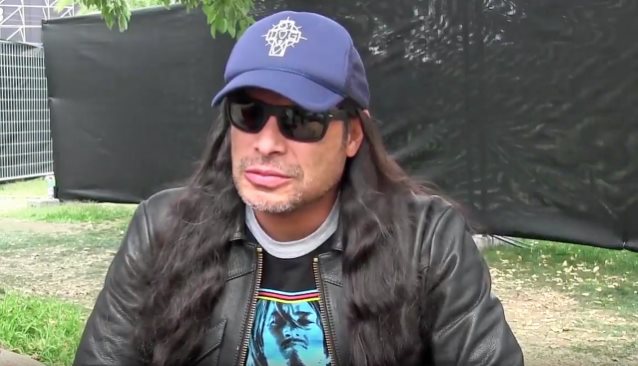 METALLICA bassist Robert Trujillo was interviewed by Cooperativa before the band's April 1 concert at Lollapalooza Chile in Santiago. You can now watch the chat below.

Asked if he is happy with the response to METALLICA's latest album, "Hardwired… To Self-Destruct", Trujillo said: "Yeah, the album's been very well received. It's doing incredibly well. I mean, I don't know if we could have asked for a better release.

"You never know what people are gonna think of your record. And for this album to so well received, and we get to do it our way. And I really am proud of the production; I love the sound of the bass — I think it's very powerful."

Trujillo also talked about the musical similarities between some of the songs on "Hardwired… To Self-Destruct" and those on METALLICA's earlier albums. He said: "We write together. I feel like 'Death Magnetic' was a first step and then this is a second step, and I feel good about the third step for the future. That's the thing — everything feels great. You know, a new producer who gets great sounds, who's a part of the team; new ideas, new tour… It's a great place to be. When you get into your career a little bit older, but you're still having fun."