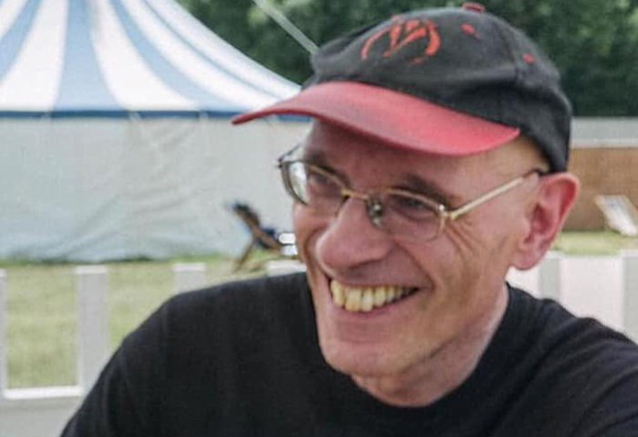 METALLICA's Lars Ulrich, BLACK SABBATH's Tony Iommi, IRON MAIDEN, SAXON, FEAR FACTORY's Dino Cazares and Doro Pesch are among the heavy metal musicians who have reacted on social media to the passing of longtime music journalist Malcolm Dome. The veteran U.K. writer died over the weekend at the age of 66.

Dome has written about rock and heavy metal since 1979. In addition to publishing several books on such artists as AC/DC, METALLICA and LED ZEPPELIN he had contributed to a number of magazines, including Record Mirror, Metal Hammer, Kerrang! and Classic Rock.

Dome is credited with inventing the term "thrash metal" while writing about the ANTHRAX song "Metal Thrashing Mad" in February 1984. Up until that point, bands like ANTHRAX and METALLICA had referred to their sound as "power metal." Malcolm also provided a sleeve notes for various reissues, including those by German thrashers KREATOR, whose frontman Mille Petrozza wrote: "Shocked to hear about Malcolm Dome’s passing today. Malcolm wrote all liner notes for the recent @kreatorofficial reissues, including 'Enemy Of God' and 'Hordes Of Chaos', still on the horizon. We talked on Skype for hours and Malcolm knew more about my band's past, than I could remember myself. He was a true music lover and one of the funniest people out there. Working with Malcolm never felt like actual work."

Ulrich said: "Extremely sad to hear of Malcolm Dome's passing. Not only was he an incredible talent who helped guide my relationship with heavy music, but he was also a great person. Today, I'm thinking of the fun, memorable times we spent together back in the day."

Iommi wrote: "Malcolm was a lovely guy, he interviewed me many times and was always positive about the music. He was one of the first journalists to totally get metal. We even worked together last year when he helped me sort out my Wikipedia entry. Sadly missed."

In 1980, Malcolm co-wrote the book "Encyclopedia Metallica", which some believe served as the inspiration for the METALLICA band name.

Words cannot express how sorry I feel to hear about the passing of Malcolm Dome. Rest In Peace. God Bless

Extremely sad to hear of Malcolm Dome’s passing. Not only was he an incredible talent who helped guide my relationship with heavy music, but he was also a great person. Today, I’m thinking of the fun, memorable times we spent together back in the day. https://t.co/9chlIVjSMm

So sad to hear of the passing of Malcolm Dome, one of rock and metal's great journalists. It was always a pleasure giving interviews and generally having a chat. RIP Malcolm, you will be missed. pic.twitter.com/cmNGQ6bedp

Malcolm was a lovely guy, he interviewed me many times and was always positive about the music. He was one of the first journalists to totally get metal. We even worked together last year when he helped me sort out my Wikipedia entry. Sadly missed. - Tonyhttps://t.co/Te8hippkxB

We are all very much saddened and shocked to hear about the passing of our friend Malcolm Dome. He was fearless, intrepid, passionate and forthright as a journalist and latterly a broadcaster and we respected him immensely. pic.twitter.com/NMRWqGT1zV

Sad to hear about the passing of Malcolm Dome. He was such an important figure for all things rock and metal and championed so many bands over the years. RIP Malcolm https://t.co/Ogy4HSr7Eb

"Very very sad news regarding the passing of iconic metal journalist Malcolm Dome today... a tireless promoter of so many bands .. ourselves included... and a genuine good guy" @official_ravenhttps://t.co/ZJQ7aDTvCJ

RIP to the great Malcolm Dome. He helped spread the word on us when MA first started and had this to say about our debut album "...one of the year’s best metal albums” in his @ClassicRockMag reivew back in 2015. After all, Malcolm did coin the term "thrash metal" pic.twitter.com/kowVSewtNP

I'm #so#sorry to hear of the #passing of #MalcolmDome. He was one of my best journalist friends. We knew each other since the early 80s. He was always so supportive & kind to me. I will miss you terribly. Keep on rocking in heaven.
🖤😢🖤🙏🖤🤘🖤
Love, Doro#doropesch#warlockpic.twitter.com/NX41q8Ta6w

I am deeply saddened to hear of the passing of Malcolm Dome. I have known Malcolm well over 30 years from the early days of The Almighty right up to the present day. He was a fine journalist and a fine human being. Condolences to Malcolm’s family. Rest easy mate.

So sad to see Malcolm Dome has left us. He was an amazing writer, a passionate supporter of UK rock music and a great sport, even after we trashed his desk at the Kerrang! offices.
Another very dark day for UK rock music. I will miss him so much. 💔

Very sorry to here that Malcolm Dome has left us. He was a champion of great rock music and a supporter of ⁦@myMotorhead⁩ all the way through to ⁦@PCATBS⁩. RIP Malcolm. https://t.co/C6v5F2eSqg

We are saddened to hear of the passing of our friend Malcolm Dome.
Malcolm was a great supporter of Saxon, and will be missed by all.
Our sympathies to his family and friends in this terrible time.
Saxon https://t.co/RPHO3v6z0Z

Extremely sad to hear about the passing of legendary journalist/writer Malcolm Dome. He was a lovely, gentle man and time spent with him was always time well spent. We'll all miss him, a huge loss to the music world.

Today we lost another legend, Malcolm Dome is a great journalist who’s written many stories on Fear Factory since 1992 R.I.P. pic.twitter.com/BsJYFi0xBK

R.I.P. #MalcolmDome. One of great rock journalists of his time. I first met him in ‘90 and we did countless interviews over the years. Last saw him for an Arch Enemy interview in 2017. I always enjoyed our talks, the man REALLY knew his stuff… A sad day for Rock’N’Roll this. pic.twitter.com/xDxGpw1QCS

Saddened to hear of the passing of Malcolm Dome. I’ve done countless interviews with him throughout the 30+ years we’ve known each other and always enjoyed our discussions. RIP Malcolm 🙏 pic.twitter.com/uwJddSPv1E

Thank you and goodnight to Malcolm Dome. He was the first journalist to ever write about Thunder and a thoroughly nice bloke who genuinely cared about rock music.

Very sad to hear about the passing of Malcolm Dome. Apart from his incredible knowledge of everything metal, he was also behind @OfficialPL right from the beginning, and always pleasant company to hang out with on our frequent weekend trips to London in the early '90s.

Long time friend and Twisted Sister champion #MalcolmDome has just died. His liner notes are in many TS albums including our new release called #tearitloose. incredible loss of a champion of the metal community. RIP Mr. Dome

So sorry to hear of the passing of Malcolm Dome.
I knew Malcolm for forty plus years, he loved his music, was an accomplished writer and a fervent football man, so we had a lot in common.
I, and all he knew, mourn him. My deepest condolences to his family & many friends. RIP. ❤️ pic.twitter.com/i9gw7jnKjk

The man who invented the term thrash metal & most importantly, a dear friend, has passed away. A genuinely kind person with an encyclopedic mind for metal & a true legend. Rest In Power Malcolm Dome. Sending love to all who had the pleasure to know him 💔 https://t.co/WsLsKTdUKL

Malcolm Dome RIP. Really saddened by this news. We are forever grateful that Malcolm embraced and supported our label in the early days, and offered support and kind advice. A top journalist and fine fellow, he will be missed. https://t.co/ziI5X2vi6P#malcolmdomeRIP

We are extremely sad to report the passing of our dear friend and colleague Malcolm Dome. He was a legend in the rock music world, a great writer and rock DJ, Malcolm's passion for music was boundless and his positive energy filled the lives of those of us close to him. pic.twitter.com/Gwv7H5ErMX

I never met Malcolm Dome, but whenever he was in a music doc I liked his views on things. Sounds like he was a good one.

Malcolm Dome was one of the kindest people I've ever met. He always had time for people -- a generous giant of heavy metal, a good man and a real friend. The word legend is overused and for him it is inadequate. I wish I could summon better words but I will miss him dearly.

Probably the hardest thing I've ever had to write. I shall miss my dear friend terribly but am thankful that I am left with over 30 years of amazing memories of this unique and wonderful man... https://t.co/uRwo4FXmlX

One of my favourite people. One of my favourite guests. One hell of a hole to fill. Sometimes when you've known someone so long, 30 years, you take them for granted. Not Malcolm, I always treasured our time together.
Miss you already mate #MalcolmDomepic.twitter.com/QczSgiHOAF

I'm sad to hear about the passing of legendary British rock journalist Malcolm Dome. He was only 66. We got connected through our weekly phone calls for @TotalRockOnline and later "The Art Of Metal" book. He loved heavy rock and enjoyed what he did. He lived for the music! R.I.P. pic.twitter.com/uP4HwTkeFO

Ah hell, RIP Malcolm Dome. Malcolm was one of the metal journalists I revered in my early life. Later he contributed to a couple of my books and I spent a couple of my best nights ever sucking down Jagermeister at the bar in the Crobar with him. Terrific journalist and a good man pic.twitter.com/niXe7U6vf0

I hope he didn't die alone. He lived so much of his life alone, it was the first thing that went through my mind when I got the news. I hope someone was with him... BLOG: Malcolm Dome Is Dead https://t.co/9Z9vl7dmnW

We are sad to hear of the death of music journalist Malcolm Dome. A pioneering rock & heavy metal writer, we enjoyed working with him & relied on his encyclopaedic knowledge of music. He always had a kind word to say about CR & we'll miss him very much.
https://t.co/KizfNCNRCkpic.twitter.com/hcaggNvKiy

Listen up. Without Malcolm Dome, metal and metal journalism as you know it would not exist. #RIP#legendhttps://t.co/OSa1Q8GFU0

I'm so very sorry to hear that Malcolm Dome, one of my very favourite rock journalism colleagues, has passed away. Will write more about the legend that is Malcolm, once I've gathered my thoughts.