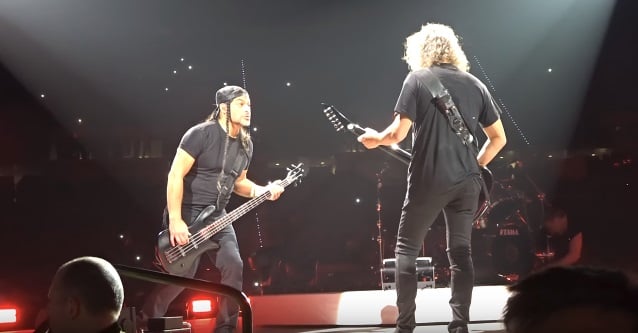 According to AltroSpettacolo.it, Robert Trujillo and Kirk Hammett performed a cover of Vasco Rossi's "C'è Chi Dice No" during METALLICA's February 10 concert in Turin, Italy. Fan-filmed video footage of their rendition can be seen below.

Italy's most famous pop-rock singer-songwriter, Rossi in 2017 broke the Italian record for most tickets sold for a single concert, with 220,000 people attending his show in Modena. The singer's roots were in rock in the late seventies, but in recent decades has turned his attention to pop and commercial music, despite keeping a "rocking" backing band, which includes Stef Burns (who has previously worked with Y&T and ALICE COOPER) and Matt Laug (ALICE COOPER and SLASH'S SNAKEPIT). He has no known connections to heavy metal, and the choice of METALLICA's cover left many people scratching their heads.

METALLICA's show in Turin was also notable for the inclusion of the 1986 classic "Orion" as an homage to the band's late bassist Cliff Burton, who would have celebrated his 56th birthday on that day.