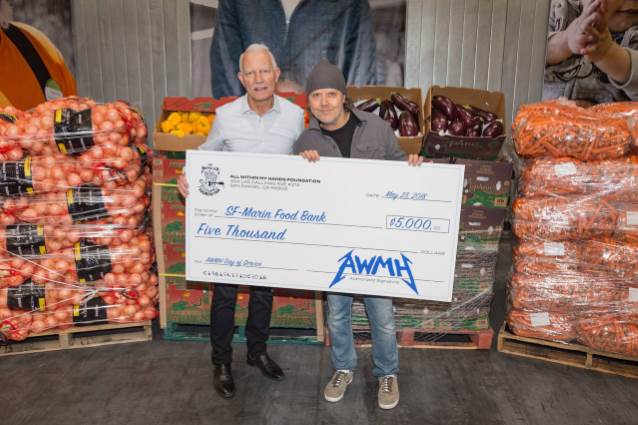 Last year, METALLICA launched All Within My Hands, the band's foundation that aims to assist and enrich the lives of members of the communities who have supported them for so many years, as well as encourage participation from fans and friends and facilitate volunteerism among the METALLICA family. With that in mind, METALLICA's first day of service was held yesterday (Wednesday, May 23),with the band inviting fans across the United States to volunteer for a day at the community food banks the band supported during last summer's North American tour.

According to KGO-TV, METALLICA's Lars Ulrich presented the SF-Marin Food Bank with a check for $5,000 on Wednesday. In addition, the drummer sorted fruit to be distributed by the food bank.

"Our primary thing for the last year has been, all over where METALLICA goes to, to support local food banks. We write checks in every city. We just played a 39-day European tour where we wrote checks to the local food banks," Ulrich told KGO-TV.

In cooperation with Feeding America, METALLICA made contributions to its local partners in each city the band performed in during the 2017 stadium tour.

A huge thank you to all of the Metallica fans who participated in our very first All Within My Hands Foundation Day of...