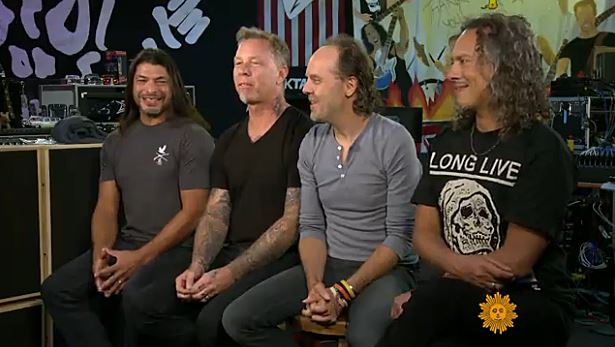 CBS' "Sunday Morning" program featured METALLICA earlier today (Sunday, September 29) on "For The Record". They talked about the good times — and bad — they experienced since their formation more than three decades ago in Southern California. You can now watch the segment below.

METALLICA's new movie, "Metallica Through The Never", opened a one-week limited run in IMAX theaters on Friday (September 27),before expanding to more screens around the country on October 4. The film, a blend of concert movie and fictional narrative, stars Dane DeHaan as a member of METALLICA's road crew who is sent on a mysterious mission while the band performs at a sold-out arena and events outside grow more bizarre.

The Pulse Of Radio asked bassist Robert Trujillo if he could name a part of the movie that was his favorite. "There's a lot of favorite parts," he said. "It's hard, there's so much going on and there's a lot of exciting moments. At the end of the day, the whole idea is really, you know, you're going on a roller coaster ride and it's going to be an adventure. Embrace it, hold on and have a good time."

James Hetfield told a Brazilian TV station earlier in the month that the concert footage in the film was "better than going to a show."

The soundtrack, which features a number of METALLICA classics performed live in the movie, came out on Tuesday (September 24) and is the first official release on METALLICA's own label, Blackened Recordings.