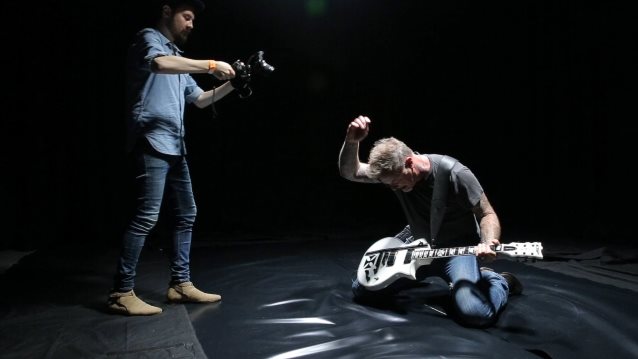 METALLICA filmed another new music video earlier today (Wednesday, October 26) in Puerto Rico, where the band is scheduled to perform tonight. The group did not reveal which song the clip is for, but it presumably another track from METALLICA's forthcoming album, "Hardwired...To Self-Destruct", which is due for release on November 18.

Several photos from the latest video shoot can be seen below.

As previously reported, METALLICA will release a new song called "Atlas, Rise!" on Halloween (Monday, October 31) at 3:00 p.m. ET. Starting this Friday (October 28),fans around the world can visit select independent record stores for the chance to obtain a free limited-edition "Hardwired... To Self-Destruct" Halloween mask. Inside each mask, fans will find a special access code that will allow them to hear "Atlas, Rise!" 30 minutes prior to its official release on Halloween.

The song is the third track to be made available from "Hardwired... To Self-Destruct", after the previously released cuts "Hardwired" and "Moth Into Flame".

METALLICA recorded the new disc at its headquarters in the San Francisco area and drummer Lars Ulrich told The Pulse Of Radio why that worked for the band this time. "Being at home, you know, the hours are definitely shorter," he said. "Obviously the upside of being at home is getting a chance to sort of go back to your own bed every night and see the kids and kind of still be involved in school grinds and domestic responsibilities and all that. Obviously, that does away with the 16-hour grind days in the studio of back in the day, you know. But it feels like the time spent in the studio flew by maybe slightly faster."

The band performed rare nine-song acoustic sets on both Saturday and Sunday nights, including versions of both its own hits and covers from THE CLASH, DEEP PURPLE and BUFFALO SPRINGFIELD.

Posted by Metallica on Wednesday, October 26, 2016