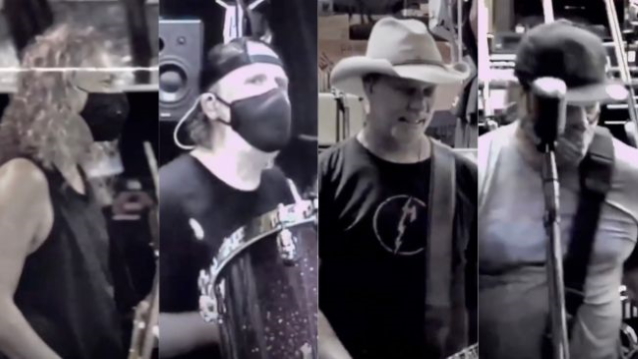 METALLICA Is Back Together In Rehearsal: 'Creeping Death' Video Available

METALLICA has uploaded video to its Instagram stories showing the the four members of the band playing together at their headquarters in San Rafael, California.

James Hetfield, Lars Ulrich, Kirk Hammett and Robert Trujillo can be seen playing the intro to "Creeping Death", with everyone except Hetfield wearing face masks.

It is not presently clear if METALLICA is rehearsing for a specific event or if it is preparing to take part in a recording session.

Back in April, Ulrich revealed in an online chat that the band could get together to write and record a new album while in quarantine.

Discussing METALLICA's plans to potentially get together to write and record a follow-up to 2016's "Hardwired...To Self-Destruct", Ulrich said: "The guys in METALLICA... we sit here and go, well, maybe in a month or two from now, is there a chance that the four of us can be together maybe at our studio here in Northern California, if the quarantine and stay-at-home orders subside — so on and so forth."

The drummer continued: "Will there be a METALLICA quarantine record? I can't tell you, because, again, I don't know how long the quarantine will last. But if you and I and the rest of the world are sitting here six months from now or a year from now, I'd say there's a very good chance."

What the hell is going on at HQ?! pic.twitter.com/B401TQ1qjS