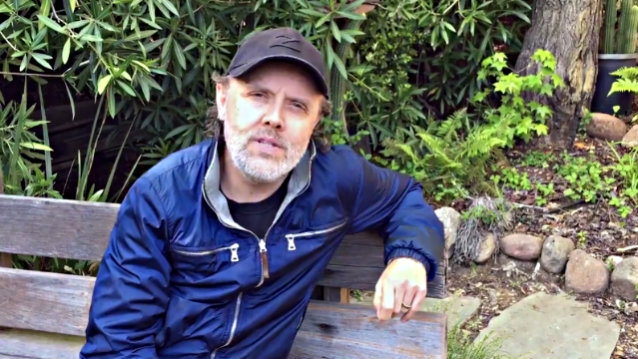 In a brand new interview with the Chicago rock station WLUP, Lars Ulrich was asked if he ever reads comments about METALLICA on the Internet and how he handles online criticism when he sees it. "I usually laugh," he said (hear audio below). "It's not often that I go below that line, but occasionally when I do, it's more for amusement, and I'll just try to see, 'And today, let's see who can say the most ridiculous thing or the nastiest thing,' and it'll be, like, 'Okay, that person right there hit the rock bottom.'"

He continued: "The only way you can get through that is… I have almost like a third-person relationship with that. It's, like, when somebody says something nasty about METALLICA or something nasty about Lars or James [Hetfield, METALLICA frontman], or whatever, it's, like, that's not the James I know, that's not the METALLICA that I know, and certainly the Lars that I see in the mirror when he smiles back at me most of the time is not that nasty person that they're talking about. You've gotta have kind of a distant relationship with that stuff, and that's how we deal with it. And most of the time, like I said, I just go for… when I go, I go more for amusement than anything. [You can't take] any of that stuff too seriously."

Ulrich's words echoed those of METALLICA guitarist Kirk Hammett, who told Minneapolis radio station 93X last August that he was staying away from reading comments online about the first single from the band's new album, "Hardwired… To Self-Destruct". Hammett explained, "As soon as I go on to my computer and turn it on, and think to myself, 'Should I read what other people are saying?' or 'Should I read some comments [on whatever web site]?' I instantly say to myself, 'Don't go there,' because I'll just get, first, angry, then frustrated, then confused, and then wanna just write it all off as just fucking useless bullshit, and why did I even waste my time."

Ulrich, Hammett and METALLICA bassist Robert Trujillo all have verified personal Twitter accounts, while Hetfield decided to abandon his Instagram profile more than three years ago after posting regularly on the photo-sharing social media site for close to twelve months. "I got sucked into the social media around… I was trying to be hip, trying to be cool," Hetfield later told The Canadian Press . "You know, my kids are on Instagram [so I thought], 'I wanna try this thing.' I just wanted to look like the cool dad to my kids. And I ended up being just… It was this huge time sucker, and that's all I was thinking about. 'Oh, hey, I'm here. I can take a picture and put it on Instagram and get some hits,' or whatever, and trying to get many followers… But there is a good part to that — you know, there's actually people you can meet and converse with and get to know, and then when you get to their town, you're [like], 'Wow, hey, you're here.' And you make a friend. But most of the time, it was just sucking my time, and I just started to neglect regular life. It was living in the cyber world, and it was not for me."

Hey everyone, psyched to finally join the Twitter party…