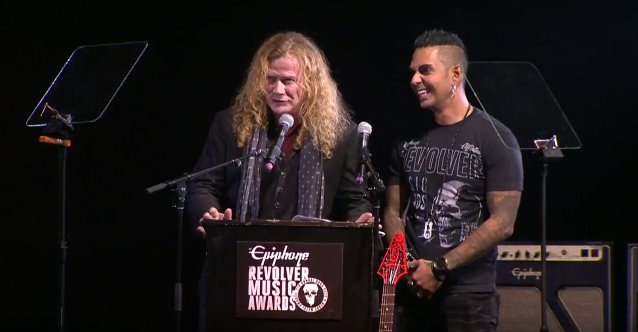 The Epiphone Revolver Music Awards also honored the musicians that make this music and scene so vital and viable. Categories included Album of the Year, Song of the Year, Dimebag Darrell Best Guitarist, Best Vocalist, and more.

This year's winners were:

Each year since 2009, with the exception of 2015, during which the event took a brief hiatus, Revolver and Epiphone have thrown the premiere U.S. hard-rock and metal awards show, previously known as the Revolver Golden Gods, in Los Angeles.

As the primary print and digital destination for the latest and loudest from established and legendary hard rock and metal acts, as well as the first place fans look to to discover emerging talent, the Revolver name carries incredible weight. Therefore, it made perfect sense for the show to now be rebranded as The Epiphone Revolver Music Awards.

The show's move to New York City this year is also a logical relocation, since Manhattan is also where the magazine is headquartered. The city was also selected as it is widely regarded as a hard rock mecca, thanks to its contributions to revolutionizing rock music through the years. New York City is home to legendary artists who helped pave the way for aggressive music, such as the RAMONES, KISS, NEW YORK DOLLS, TWISTED SISTER, WHITE ZOMBIE and ANTHRAX, among countless others.

While previous ceremonies have aired on VH1, Palladia, AXS TV and Xbox, this year's show was broadcast via livestreaming video platform Twitch.TV, which is owned by Twitch Interactive, a subsidiary of Amazon.com, and has more than 1.5 million broadcasters and 100 million visitors per month. The festivities also livestreamed simultaneously through SiriusXM's Liquid Metal along with the Guitar World and Revolver web sites, Facebook Live and YouTube channels, allowing metal fans worldwide to participate in the festivities.