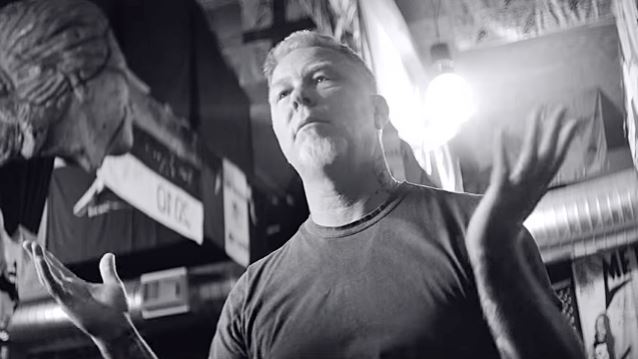 James Hetfield, Kirk Hammett and Lars Ulrich take a look back at METALLICA's formative period in a four-part Spotify series titled "Landmark – Metallica: The Early Years". The documentary, a first for Spotify, debuts August 18, with all four parts receiving their premiere simultaneously.

"Landmark – Metallica: The Early Years" is divided into chapters titled "Metal Militia", "Metal Up Your Ass", "Sophistication And Brutality" and "Armageddon's Here". Each features exclusive interviews with Hetfield, Hammett and Ulrich along with rare archival footage, reminiscences from their peers, new animation by Anthony Schepperd and a companion playlist.

Chapter one is devoted to Hetfield and Ulrich's first encounter. In it, Hetfield recalls: "When I met Lars, he was pretty much a stinky European kid," while Ulrich says of Hetfield: "He was really awkward." Chapter two brings Hammett into the band and covers the making of their debut album. Chapter three is devoted to late bassist Cliff Burton, and chapter four follows the group's early ascent.

"Landmark" is an original video series about monumental moments in music history, created for a new generation of listeners. Whether delving into the origins of thrash metal or the release of a classic album, each installment of "Landmark" enlists credible, eclectic voices to explain not just what happened, but why it still matters.

Each multi-part installment is comprised of short videos that can be watched as individual, self-contained chapters or binged all at once in a half-hour viewing experience. Themed companion playlists offer newly-converted fans a chance to dig deeper after they watch.

"Metallica: The Early Years" celebrates penpals, the birth of thrash metal, heavy-riffing cellists, and the origins of one of rock's most influential bands.