Single-day and weekend passes for Louder Than Life are on sale now at www.LouderThanLifeFestival.com starting at $99.50* for a single day and $249.50* for four days (*plus fees).

Perry Farrell of JANE'S ADDICTION says: "'Whiskey is for drinking; water is for fighting over' — Mark Twain. And I'm on the lookout for the best drinking whiskey in Kentucky."

Adds Danny Wimmer, founder of Danny Wimmer Presents: "DWP has always considered Louisville home, so to be able to bring America's Biggest Rock Festival back in 2021 means everything to us. After a year filled with challenge after challenge, we worked incredibly hard to curate a lineup worth the wait for our fans. Weather got in the way of NINE INCH NAILS in 2018, the pandemic derailed our plans for two big METALLICA sets in 2020 — so to have them both back for 2021, along with KORN and the rest of this incredible lineup over four days, that's the kind of 'new normal' that we're all looking forward to."

The current Louder Than Life lineup is as follows (subject to change):

Louder Than Life will feature nearly 70 music acts over four days, with performances on three stages, along with award-winning bourbons, whiskey, spirits, craft beer, and the best food Louisville has to offer. Festival attendees will enjoy a variety of onsite food and beverage experiences, as well as sponsor activations that celebrate the bourbon culture and culinary heritage of this unique American city.

Single-day and weekend general admission and VIP passes for Louder Than Life are on sale now. Festivalgoers are encouraged to buy early and save, since pass prices will increase in the coming weeks. A limited number of specially priced tickets for military personnel are on sale now via GovX. A limited number of Weekend Camping Packages are available for both car + tent and RVs. Admission to the festival is not included in Weekend Camping Packages and must be purchased separately.

VIP pass perks include (but are not limited to) access to all general admission areas in the festival grounds, as well as a dedicated festival entrance, access to a shaded "hang area" with dedicated bars, live audio/video streams of main stages, access to a front-of-stage VIP viewing area, dedicated merch tent, premium dedicated food and drink (for purchase),air-conditioned restrooms and a commemorative laminate.

Top Shelf VIP is presented by Angel's Envy and passes will include all the above plus an air-conditioned tent, front-of-stage viewing for the right main stage, additional viewing deck, all-inclusive premium drinks and complimentary hors d'oeuvres.

Louder Than Life is produced by Danny Wimmer Presents, one of the largest independent producers of destination music festivals in America. Since debuting in 2014, Louder Than Life continues to develop and grow. For 2021, festival organizers added a fourth day, with the festival kicking off on Thursday.

Over the coming months, Danny Wimmer Presents will be working with local officials to make sure the festival conforms to then-current social distancing protocols.

The Highland Festival Grounds at KY Expo Center are located at 937 Phillips Lane in Louisville, KY. 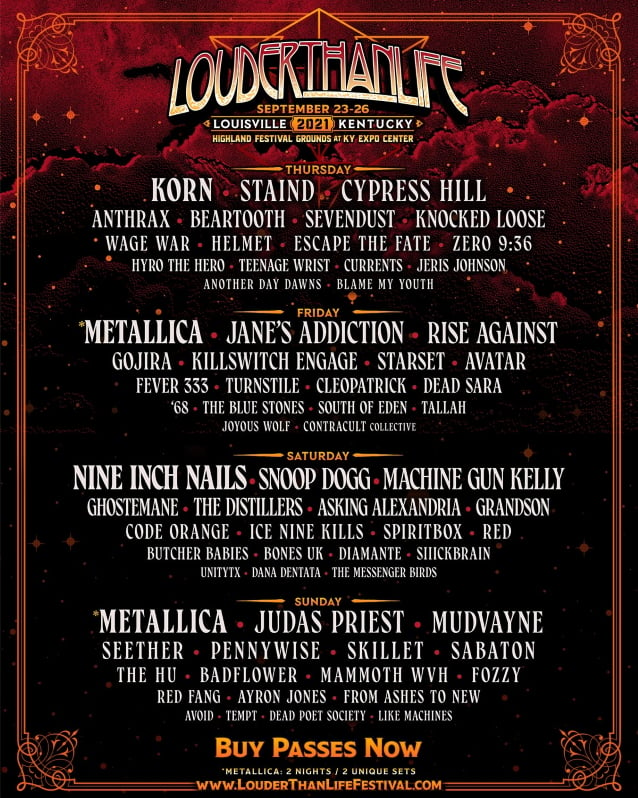