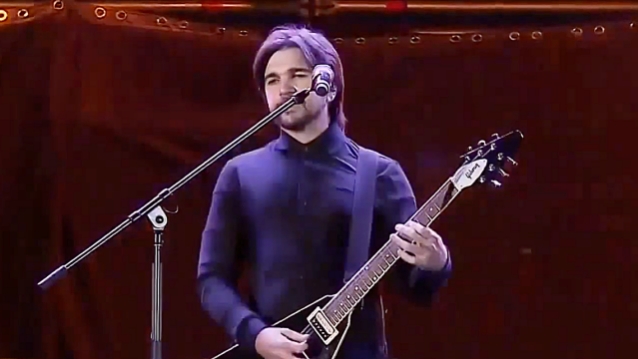 Earlier this month, the Latin rock star performed the "Kill 'Em All" classic at Rock Al Parque festival in Bogota, Colombia. Video footage of his rendition — complete with pyrotechnic displays — was posted online and it eventually caught the attention of the METALLICA members themselves.

On Monday (July 15),the San Francisco Bay Area heavy metal legends took to Twitter to share a clip of the performance and wrote in an accompanying message: "We're blown away by the reception our friend @juanes received in Bogota for his awesome rendition of Seek!"

Last year, Juanes told The Philadelphia Inquirer about his early musical inspirations: "I came up in Colombia with folk music, singing with my parents and sisters. There were the rhythms of tango and bolero and cumbia. Those were my strongest influences. But when I was 13, I went crazy with rock music and became the biggest fan of METALLICA, SLAYER and SEPULTURA. I still love METALLICA. Today, I listen to many new artists and learn while staying connected to my roots. For instance, I love reeggaton. I hear that stuff from my kids. They teach new music all the time."

In a 2011 interview with The Washington Post, Juanes said that he "got crazy with rock music" when he was 13 years old. "I was a big fan of METALLICA, SLAYER, SEPULTURA, MEGADETH, all those guys. It was part of my life for 10 years, and then I was part of a metal band for a moment and then the band broke up and I moved to Los Angeles and started my career. Even if it doesn't have anything to do with metal music, there is always a little bit of those years in my music, always a little piece of attitude that I try to combine with the folk side."

🔥 We’re blown away by the reception our friend @juanes received in Bogota for his awesome rendition of Seek! #RockalParque2019pic.twitter.com/NOZozTFMGJ