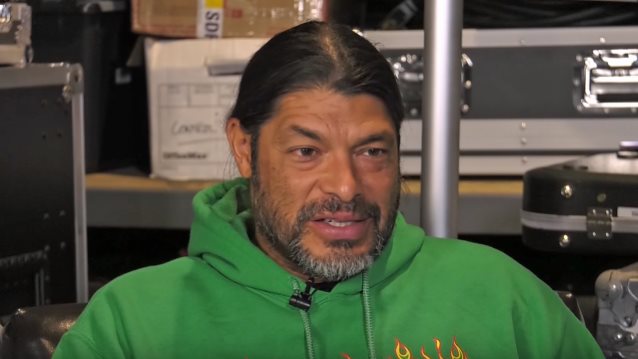 Robert Trujillo recently spoke to METALLICA's fan-club magazine So What! about the band's new full-length effort, "Hardwired… To Self-Destruct". Check out the chat below.

"I think for this album, it kind of makes sense that we really reconnected with the old school," the bassist stated about the new record's musical direction. "It's almost like the old school on steroids, I feel."

He continued: "I'm very proud that there's energy and just a lot of firepower in what we're delivering on this record. In terms of production, sound, drums, bass, just locked in tight solid — crushing, really. I'm so proud of how we actually played on this body of music."

Trujillo, who joined METALLICA in 2003, also talked about his role in the songwriting and recording process for "Hardwired… To Self-Destruct", saying: "I look at it this way: whatever I can do for the band, whether it's support the band by writing riffs, transitions or whatever needs to happen, I'm there for that. If it's to support the band and just play kickass bass… I mean, we always jam, so whether they're… You can't go wrong with a James Hetfield riff. We're still playing together, and we're still jamming, and the parts that I'm writing as a bass player are still a part of the creative journey. So it's not like a Robert Trujillo song and whoever else… I'm there to support METALLICA."