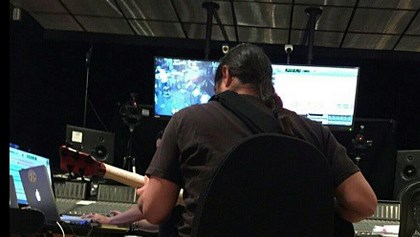 METALLICA 'Rocking Along' In The Studio

METALLICA's official Instagram account has been updated with a photo of the band's bassist, Robert Trujillo, laying down tracks in the studio. The picture in question, which includes the caption "Rockin along . . .", appears to have been taken by METALLICA drummer Lars Ulrich, whose hand and feet are also visible in the photo.

Trujillo told Rock Cellar magazine in a recent interview that METALLICA is "blueprinting" the songs for its new album at the moment, saying, "There are a lot of ideas, a lot of song bodies; you gotta go through the process. For me personally, I'm really excited about what we've been able to jam out." Trujillo added, "I don't like to make predictions, but I'd like to think — at least for me — that I'm really happy with what's happening instrumentally."

Trujillo told The Pulse Of Radio that the band is enjoying the writing process this time around. "We're having a really amazing time," he said. "It's fun, it's a lot of hard work, it's like you're looking at that mountain of ideas and you're like, 'Okay, it's time to climb this beast and do what we've got to do.' I'd say we've pretty much exhausted our touring cycles, so we're really, really excited about nurturing the songs and bringing them to life and that's where we're at right now."

Trujillo said about the long pre-production for the record, "Writing a METALLICA song is a journey and a process, and it takes time. But that's what's special about it. METALLICA likes to nurture a song."

METALLICA has spent a lot of time outside the studio in 2014, with activities that included a string of European all-request shows last summer, being guests of honor at a film festival, and playing a week-long residency on "The Late Show With Craig Ferguson".

Trujillo himself has been working on a documentary about legendary bassist Jaco Pastorius, and recently launched a crowdfunding campaign to secure the funds necessary to complete the project.