METALLICA's Norwegian chart record is surprisingly held by the critically maligned "St. Anger" effort, which spent four weeks at the top of the album chart in 2003.

Other notable hard rock/metal releases on this week's Norwegian album chart include the latest album from TNT, "Atlantis", which debuted at No. 14; and SLIPKNOT at No. 21 with "All Hope Is Gone", just six weeks prior to the band's sold-out concert at the Oslo Spektrum.

"Death Magnetic" has topped The Billboard 200 chart for the third consecutive week with U.S. sales of 132,000 copies for the seven-day period ending September 28. This brings the total number of copies of "Death Magnetic" sold in the U.S. so far to 959,000.

"Death Magnetic" sold 490,000 copies in its first four days of release, arriving in stores on Friday, September 12 instead of the usual Tuesday. 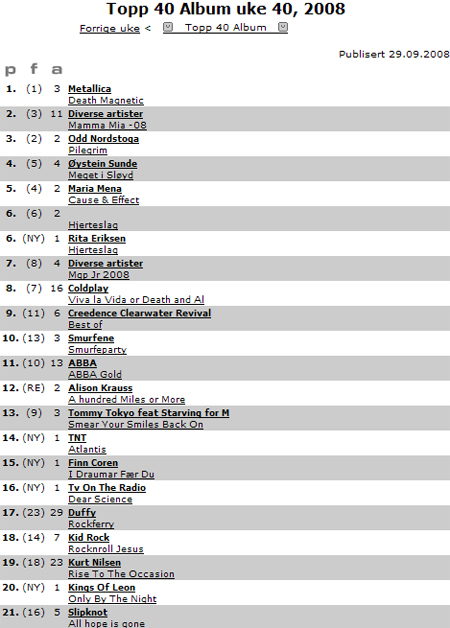